What does Cressida mean?

[ 3 syll. cres-si-da, cr-ess-ida ] The baby girl name Cressida is pronounced in English as KREHS-ah-Dah †. Cressida is largely used in English and its origin is Germanic. Cressida's meaning is daughter of Chryses; golden. The name is well known among English speakers from the Trojan princess Cressida in the legend of Troilus and Cressida, as told by Chaucer and Shakespeare among others. Chaucer used the name in the form Criseyde (Old English), from Boccaccio's Criseida (Old English), which was apparently from Chryseis (Old Greek) under the influence of Briseida. Briseida means 'daughter of Brisis', while Chryseis means 'daughter of Chryses' and is ultimately from the Greek element 'chrysos'. Both names are mentioned in Homer's Iliad. The modern form Cressida was created when Shakespeare Latinized Chaucer's name. It was first adopted by English speakers in the 20th century, in spite of the negative history in literature; Shakespeare's Cressida is lascivious, Boccaccio's is faithless, and Chaucer's is naive and easily misled.

The diminutive forms Cressa (English) and Cressy (English) are other variants of the name.

Cressida is not popular as a baby name for girls. It is listed outside of the top 1000 names. 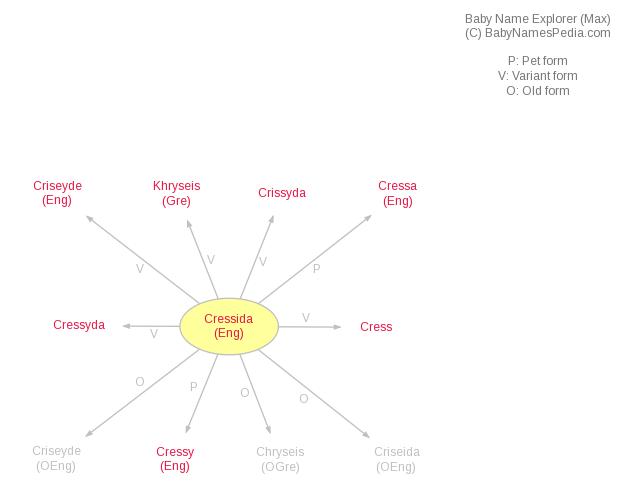