What does Cruz mean?

[ 1 syll. cruz, cr-uz ] The baby girl name Cruz is also used as a boy name, with the latter form being more popular. It is pronounced KRUW-SH (Portuguese), KRUW-TH (Spanish), or KRUWS (Spanish-Latin American) †. Cruz has its origins in the Spanish language. It is used largely in Portuguese and Spanish. It is a biblical name derived from cruz which means 'cross' ; crux 'cross' ; crucis 'cross'. The generic name has been used in the New Testament of the Bible. See Cruz for more information.

A form of Cruz is the name Cruzita.

Another form of the name is the Spanish diminutive Crucita.

See also the related form, the English and Spanish Maricruz.

Cruz is rare as a baby girl name. At the modest peak of its usage in 1923, 0.007% of baby girls were named Cruz. It had a ranking of #797 then. The baby name has dropped in popularity since then, and is currently used only on an infrequent scale. Out of all girl names in its family, Cruz was nevertheless the most popular in 2018. Although there were times from 1921 to 1936 that Cruz was more popular with girls, today it is used more commonly as a boy name. There were 31% more boys than girls who were named Cruz in 1940. 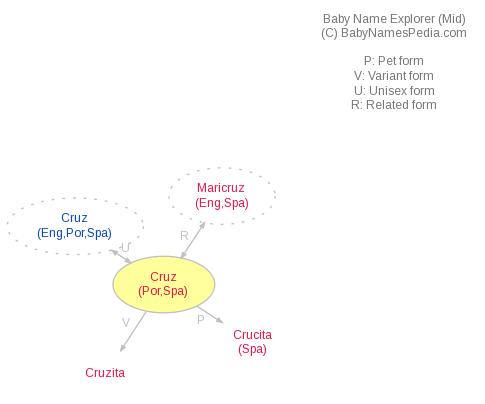