What does Crystal mean?

[ 2 syll. crys-tal, cr-yst-al ] The baby girl name Crystal is also used as a boy name, though the use for girls is far more popular. It is pronounced KRIHS-TaaL †. Crystal's language of origin is Latin and English. It is predominantly used in English. English origin: It is from crystal ; krystallos which means 'ice' ; kreus 'crust, ice crust'. The first name is derived from the common English word, itself of the Greek krystallos and ultimately of Indoeuropean roots. The given name was first taken up in the 19th century by English speakers during the vogue for jewel names. In the 20th century, it was especially popular among Afro-Americans.

In addition, Crystal is a form (English) of the Dutch, English, German, Greek, and Scandinavian Christina.

What are the Variant Forms of Crystal?

Crystal is an all-time favorite. Today it is still a somewhat popular baby girl name, but not as much as it was before. The name grew in popularity from the 1930s up to the 1980s. At the peak of its usage in 1982, 1.054% of baby girls were named Crystal. It had a ranking of #9 then. The baby name has steeply dropped in popularity since then. In 2018, it ranked at #717 with a usage of only 0.021%. Out of the family of girl names directly related to Crystal, Christina was the most regularly used. It was more regularly used than Crystal by 82% in 2018. In the last century Crystal has mainly been a baby girl name. There were 228 times more baby girls than boys who were named Crystal in 1983. 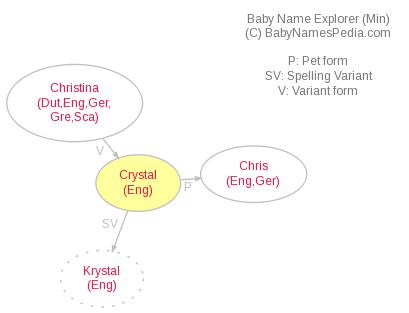