What does Curtis mean?

Curtis is mainly used in the English and German languages, and its language of origin is Old French. The first name is derived from the English surname, itself originally of the Old French 'curteis' (meaning courtly, courteous) and presumably a medieval nickname for someone who was courteous. The given name was first used by English speakers in the 11th century; it was borne by William the Conqueror's eldest son. It also came to be associated with the Middle English 'curt' and 'hose' from an early date. The name has been popular among Afro-Americans.

Curtis has 17 variant forms that are used in English and other languages. Variant forms used in English include Cortez (used in Spanish as well), Courtis, Curio, Curtell, Curtiz, Curtus, Curtys, Curtyss, and Kurt. The contraction Curt, and the variant spellings Curtice, Curtiss, and Kurtis are other English forms.

Curtis's origin is Middle English. It is derived from the words 'curt' meaning short ; 'hose' leggings.

Curtis is a classic favorite. At present it is still rather popular as a baby boy name, but not as much as it was previously. At the height of its usage in 1962, 0.265% of baby boys were named Curtis. It was #73 in rank then. The baby name has substantially slipped in popularity since then, and it is used on a modest scale in recent times. In 2018, its usage was only 0.023% and its ranking #616, but it was nevertheless the most commonly used within all boy names in its family. 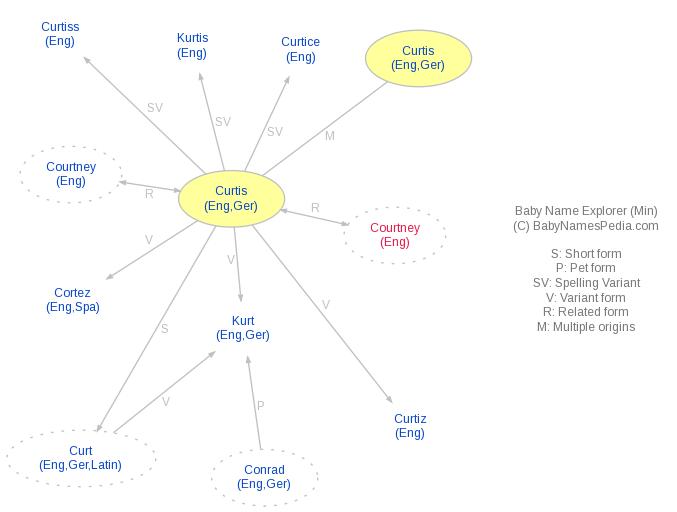