What does Cyrus mean?

Cyrus is used predominantly in the English and Iranian languages, and it is derived from Old Persian origins. The name's meaning is far-sighted; throne; sun. Kurus (Old Persian), Kurush (Old Persian), and Kyros (Old Greek) are older forms of Cyrus. The origin of the name is disputed; from Persian roots, it could mean 'far-sighted', or it could be from the Persian element 'khuru' or 'khur'. The name could also be of Greek origin. The name was borne by Cyrus the Great (-529 BC) who founded the Persian Empire; his mention in the Old Testament of the Bible as the king who freed the Jews has popularized the name among the Puritans. The name was also borne by several other kings of ancient Persia, and various saints including the obscure 4th-century martyr Saint Cyrus. The given name was first adopted by English speakers in the 17th century. The name Kyra (English and German) is the female version of Cyrus.

Cyrus has 18 variants that are used in English and other languages. Variants used in English include Ciris, Cirus, Cyress, Cyrie, Cyris, Cyriss, Cyro, Russ, Syris, and Syrus. The short form Cy, and the diminutive form Cye are other English variants.

Cyrus is largely used in the English language and its origin is Old Greek. The meaning here is of the lord. It is derived from the element 'kyrios' which means lord. Kyros (Old Greek) is an old form of Cyrus. The name was associated with the Greek 'kyrios' by early Christians. The name Cira (Italian and Spanish) is the female equivalent of Cyrus.

Cyrus is a variant of the name Syrus (English).

Cyrus is fairly popular as a baby name for boys. The name's popularity has been rising since the 1960s. At the modest peak of its usage in 2018, 0.042% of baby boys were given the name Cyrus. It ranked at #389 then. Out of all boy names in its group, Cyrus was the most widely used in 2018. 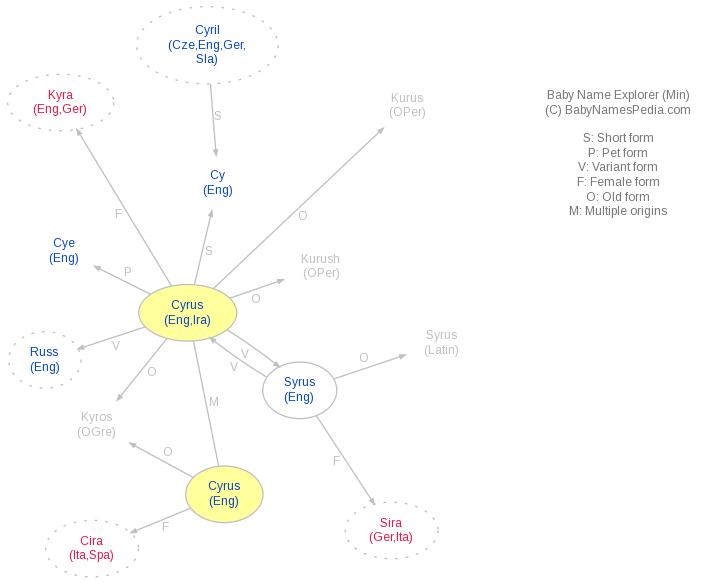