What does Dahlia mean?

[ 1 syll. da-hlia, dah-l-ia ] The baby girl name Dahlia is pronounced as D-LYaa- †. Dahlia is used chiefly in English and German, and its origin is Germanic. Its meaning is literally from the word 'dahlia'. The first name is derived from the flower name. The flower was named in the 19th century in tribute to the Swedish botanist pioneer Anders Dahl (1751-1789), whose surname is itself from the name Dale. The given name Dahlia was first adopted by English speakers at the end of the 19th century during the vogue for plant and flower names. It has been popular in literature, having appeared in George Meredith's novel Rhoda Fleming (1865) and P.G. Wodehouse's Jeeves novels (1915-1974).

Dahlia has 14 variants that are used in English and other languages. English variants include Dahiana, Dahl, Dahlea, Dahliah, Dahlya, Dahlye, Daleia, Dalla, Dalya (used in Turkish too), Dayha, and Dollie. Other English forms include the spelling variants Dalia (used in Arabic, German, Hebrew, Italian, and Spanish too) and Daliah. A variant of Dahlia used in other languages is Dália (Hungarian).

Dahlia is a fairly popular baby name for girls, and it is also perceived to be fairly trendy. The name's popularity has been increasing since the 2000s; before that, it was of very modest use only. At the recent height of its usage in 2016, 0.044% of baby girls were named Dahlia. Its ranking then was #393. In 2018, its usage was 0.041% and its ranking #410, and it was the most commonly used within all girl names in its group. 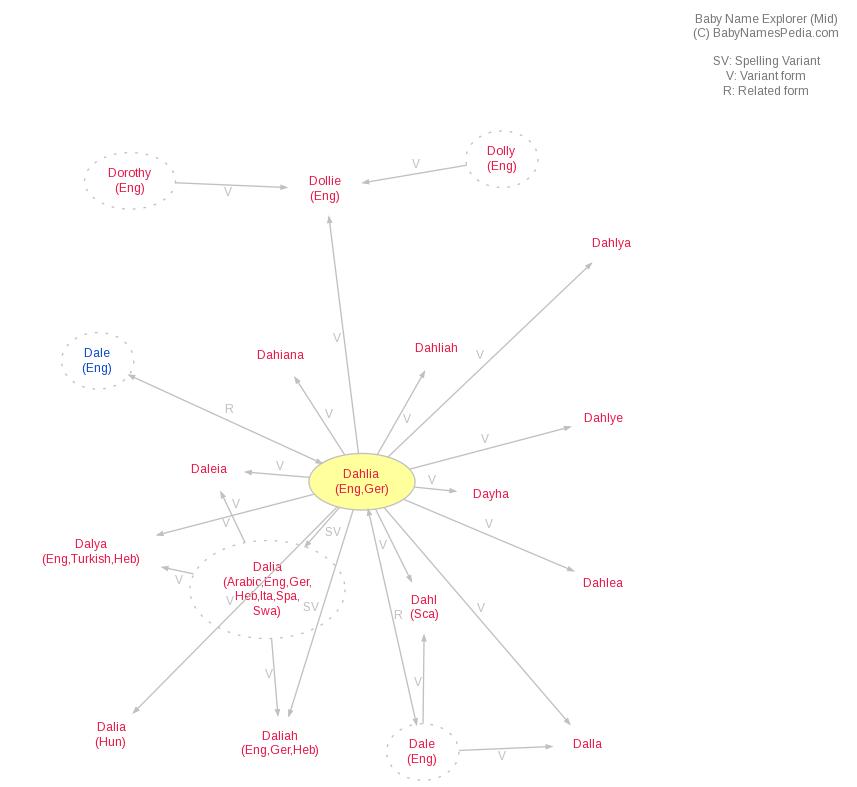