What does Dale mean?

[ 1 syll. da-le, dal-e ] The baby girl name Dale is also used as a boy name, with the latter form being far more popular. It is pronounced as Dey-L †. Dale is of English origin and it is also used mainly in English. It is derived from the word dael which is of the meaning 'dale, valley'. The feminine use of the name was first promoted by the fictional Dale Evans, the heroine of Alex Raymond's comic strip Flash Gordon (1934-). See Dale for more information.

Dale is a widely used name; it has 22 forms that are used in English and foreign languages. English forms of the name include Daele, Dail, Daila, Daile, Dalena, Dalene, Dalenna, Dalina, Daline, Dalla, Dallin, Dayl, Dayla, Daylan, Daylee, Daylin, and Daylyn. Another English form is the spelling variant Dayle.

See also the related form, the English and German Dahlia.

Dale is unusual as a baby girl name. Its usage peaked modestly in 1952 with 0.058% of baby girls being named Dale. It had a ranking of #236 then. The baby name has experienced a marked drop in frequency since then, and is currently of only sporadic use. Among the family of girl names directly related to Dale, Dahlia was the most commonly used in 2018. Dale has in the last century been mainly given to boys. There were 17 times more boys than girls who were named Dale in 1971. 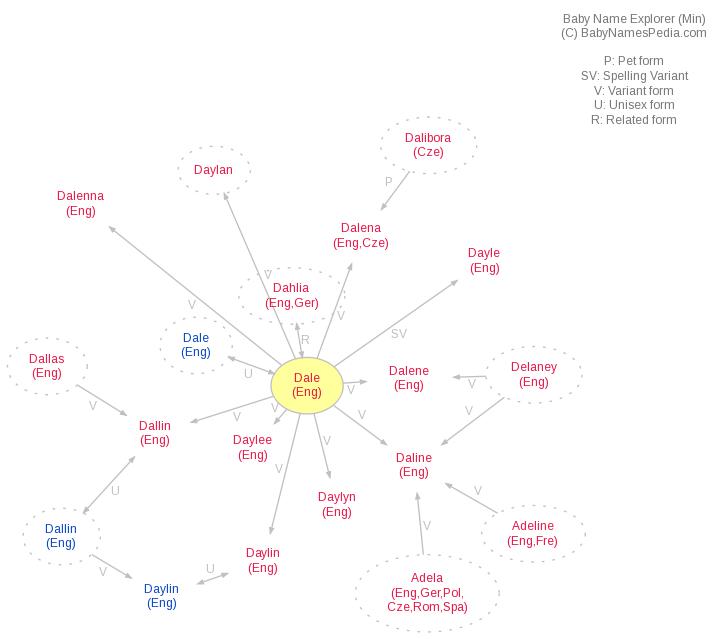