What does Dale mean?

[ 1 syll. da-le, dal-e ] The baby boy name Dale is sometimes used as a girl name. It is pronounced as Dey-L †. Dale is largely used in the English language and its origin is also English. It is from the element 'dael' which means dale, valley. The first name is derived from the surname denoting someone living in a dale or valley. It was first adopted by English speakers in the 19th century, chiefly in the USA. See Dale for more information.

Dale has 15 variants that are used in English and other languages. Variants used in English include Dael, Daele, Daelen, Dail, Daile, Dalan, Dalian, Dalle, Dallin, Daly, Dayl, and Dayle. The contraction Dal, and the pet form Daley are other English variants. A variant of Dale in other languages is Dalibor (Czech).

Dale is unusual as a baby name for boys. Its usage peaked in 1958 with 0.394% of baby boys being given the name Dale. Its ranking then was #46. The baby name has since substantially declined in popularity, and is now of very modest use. Among all boy names in its group, Dale was nonetheless the most regularly used in 2018. Dale has predominantly been a baby boy name in the past century. In 1971, baby boys named Dale outnumbered girls by 17 times. 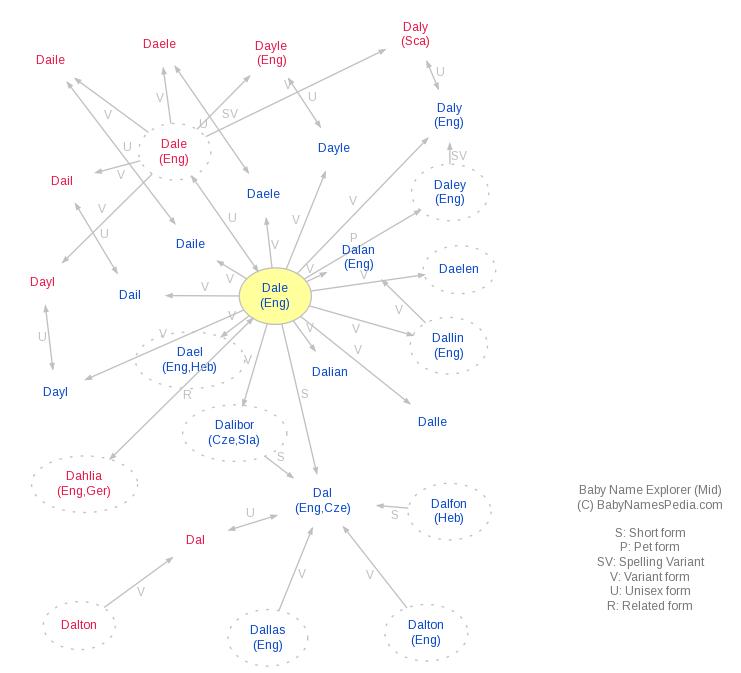