What does Dallas mean?

[ 2 syll. dal-las, da-ll-as ] The baby boy name Dallas is also used, but less commonly, as a girl name. Its pronunciation is DAELLihS †.

Dallas is used predominantly in the English language and its origin is Scottish. The name's meaning is meadow dwelling, resting place. The first name is derived from the surname; the surname is itself from a Scottish place name of the elements 'dail' and 'fas', or else it could be from an Old English place name. In the USA, the name is popularized by its use as a city name in Texas, which is itself possibly named after the US vice president George M. Dallas (1792-1864). The given name was also first used in tribute to the vice president, during his term of office in the mid-19th century.

Dallas's origin is Old English. Here, it means house in the valley. It is derived from the elements 'dael' meaning dale, valley ; 'hus' house. It represents the transferred use of the geographic name and the surname as a given name.

Dallas is a popular baby name for boys, and it is also viewed as fairly trendy. The name's popularity has been growing since the 1960s. Its usage peaked modestly in 2017 with 0.071% of baby boys being given the name Dallas. Its ranking then was #260. In 2018, its usage was 0.063% and its ranking #287, and it was the most frequently used among all boy names in its group. 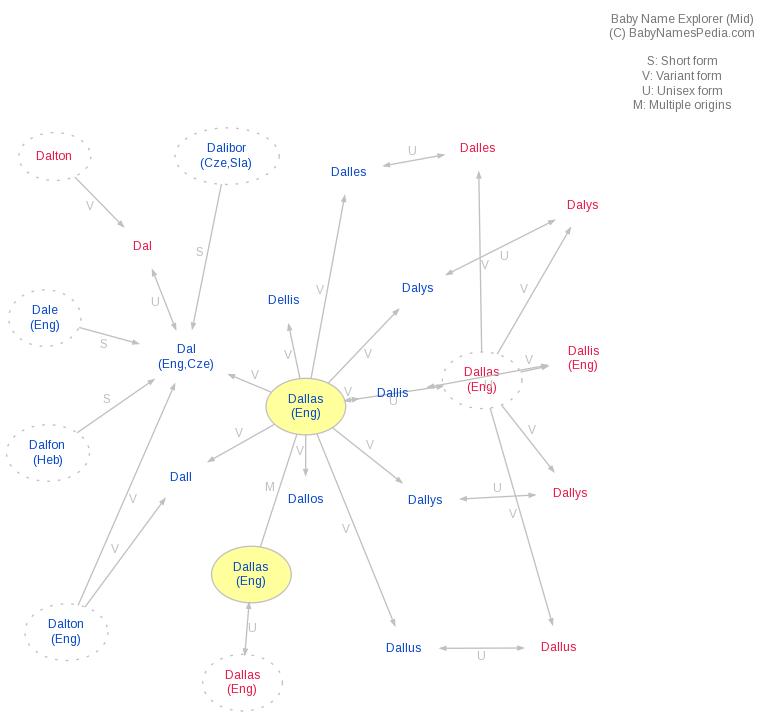