What does Damari mean?

[ 3 syll. da-ma-ri, dam-ari ] The baby boy name Damari is pronounced as D-ahMAA-Riy- †. Damari is used mostly in English and it is also of English origin. The name is a modern invention, possibly for its pleasing sound.

The origin and meaning of the name Damari is inherited by all variant forms. 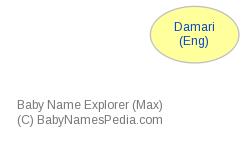