What does Damaris mean?

[ 3 syll. da-ma-ris, dam-ar-is ] The baby girl name Damaris is also used as a boy name, though the use for girls is far more popular. It is pronounced DAEM-ah-RihS in English †. Damaris' origin is Old Greek, and its use, English and German. The name Damaris means 'calf, gentleness; wife'. It is a biblical name derived from damalis meaning 'calf' ; damar 'wife'. The name is most likely a corruption of Damalis (Old Greek), although it could also be from the diminutive of the element damar. As a form of Damalis, the name is sometimes interpreted to mean 'gentleness'. In the Bible, Damaris was an Athenian woman and Christian convert of Paul; as a result of the biblical mention, in the 17th century the name was adopted by English Puritans.

Damaris is an uncommon baby girl name. At the modest height of its usage in 2006, 0.023% of baby girls were named Damaris. It had a ranking of #609 then. The baby name has steeply slipped in popularity since then, and is currently used only on a very light scale. In 2018, within the family of girl names directly related to Damaris, Mara was the most frequently used. In the last century Damaris has mainly been a baby girl name. 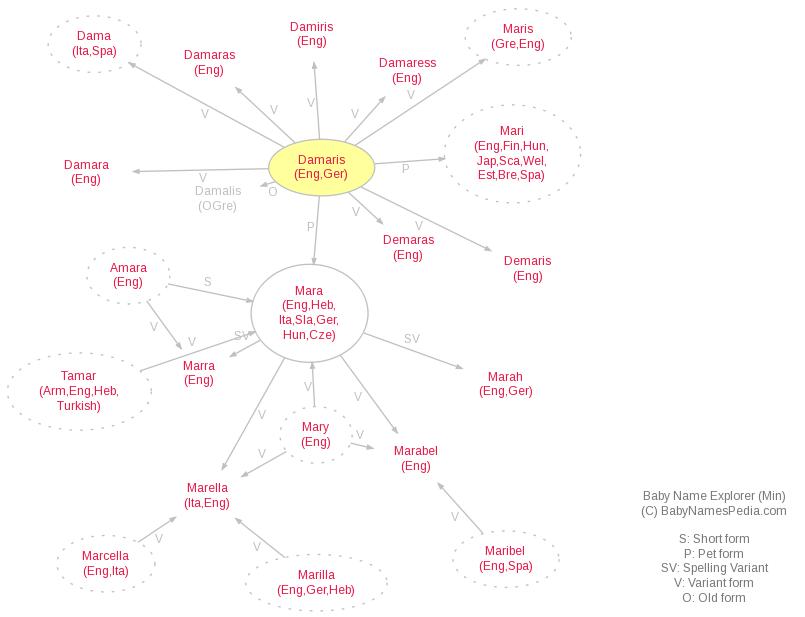