What does Dan mean?

[ 1 syll. dan, da-n ] The baby boy name Dan is also used as a girl name, but the use for boys is much more common. It is pronounced in English as DAEN or in Romanian as DAAN †. Dan is used chiefly in the English, German, and Romanian languages, and it is derived from Hebrew, Old English, English, and Latin origins. Hebrew origin, English and German use: A biblical name, it is derived literally from the word 'dan' meaning judge. Dan (Hebrew) is an original form of Dan. In the Bible, Dan was one of Jacob's sons who founded one of the twelve tribes of Israel named after him. The fictional Dan Dare is a British comic space hero created by Frank Hampson in the 1950s.

In addition, Dan is a short form of the name Danforth (English).

Dan is also a variant of the name Dangelo (English).

Dan is also a short form of Daniel in the English and Romanian languages.

Dan is also a variant of the name Dante (English, German, and Italian).

The name Dana (Czech, German, Polish, and Romanian) and the name Danya (English, Russian, and Hebrew) are the female forms of Dan.

Dan is an unusual baby name for boys. Its usage peaked modestly in 1958 with 0.172% of baby boys being given the name Dan. Its ranking then was #109. The baby name has since fallen from favor, and is today of infrequent use. In 2018, among the group of boy names directly linked to Dan, Daniel was the most popular. In the past century Dan has predominantly been a baby boy name. 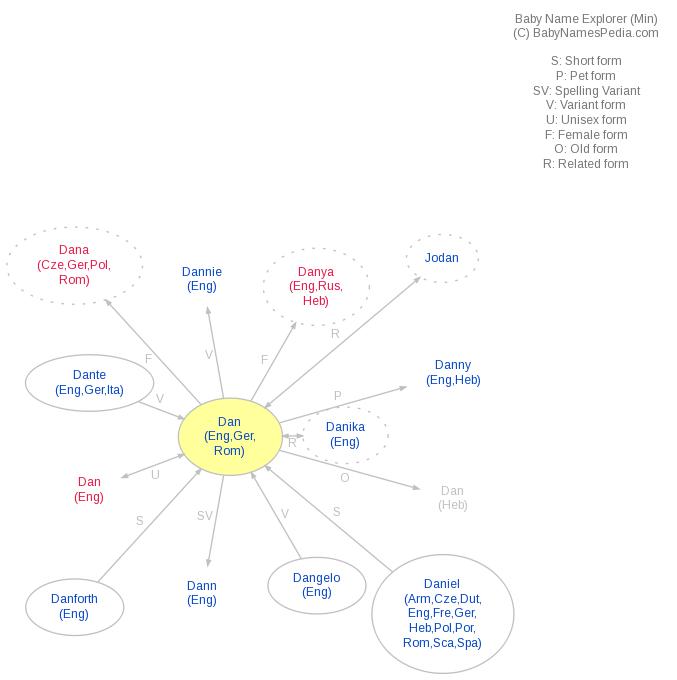