What does Dana mean?

[ 2 syll. da-na, dan-a ] The baby girl name Dana is also used as a boy name, though it is far more popular for girls. It is pronounced as DEYNAH †.

Dana has its origins in the Old English language and it is used largely in English. The name Dana means 'Dane'. The first name is derived from the surname originally given to someone from Denmark; the name of the country is of the Indoeuropean dhen (meaning 'low, flat'). Alternatively, the surname could have been given to someone living around the English River Dane. It was first bestowed in honor of Richard Dana (1815-1882), the US author of Two Years before the Mast (1840) who was also known for his work in supporting the rights of fugitive slaves.

The name Dana is used to a great extent; it has 28 forms that are used in English and foreign languages. English forms of the name include Daena, Daine, Dainna, Danaca, Danah, Danalee, Danan, Dane, Danean, Danet, Danette, Daney, Dania, Danica, Daniella, Danka, Danna (used in Hebrew as well), Danni, Dannie, Dansy, Danula, Danuta, Danya, Daynah, and Dayne. Other English forms include the spelling variants Daina and Dayna (used in Scandinavian as well). The Spanish Danas is a form of Dana that is used in foreign languages.

Dana's language of origin is Hebrew. It is predominantly used in Czech, German, Polish, and Romanian. It is a biblical name derived from the word dan which is of the meaning 'judge'. The generic name has been used in the Old Testament of the Bible. Also used by the twelve tribes of Israel. Dana is the feminine version of the English, German, and Romanian Dan.

Dana has its origins in the Arabic language and it is also used largely in Arabic. Meaning: 'black pearl'.

Dana is also a diminutive (Polish) of the English, German, Italian, Polish, Romanian, and Russian Daria.

Dana is also a shortening of the Slavic Yordana and a form (Slavic) of the English, German, and Hebrew Jordan.

Dana is an all-time favorite. At present it is still somewhat popular as a baby girl name, but not as much as it was in the past. The name grew in popularity from the 1910s up to the 1970s. Its usage peaked modestly in 1971 with 0.396% of baby girls being named Dana. It was #44 in rank then. The baby name has substantially dropped in popularity since then. In 2018, it ranked at #849 with a usage of only 0.017%. Among the family of girl names directly related to Dana, Daniela was the most frequently used. It was 5 times more regularly used than Dana in 2018. 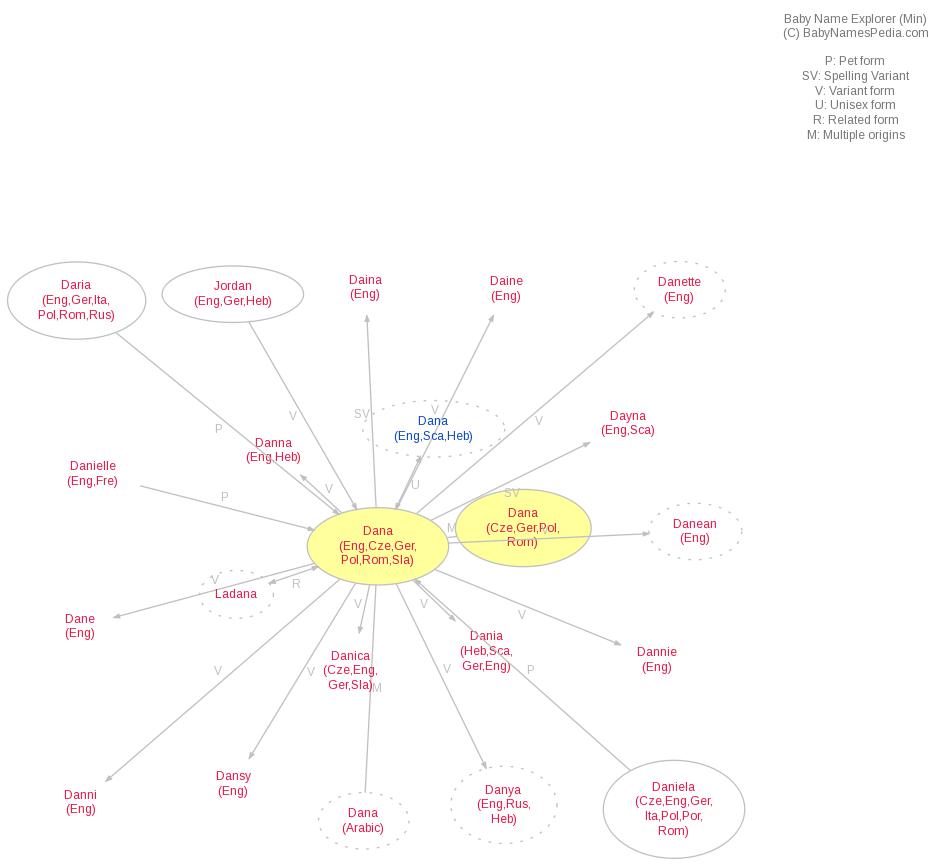