What does Dana mean?

[ 2 syll. da-na, dan-a ] The baby boy name Dana is also used as a girl name, with the latter form being much more common. Its pronunciation is DEYNAH †. Dana is used predominantly in the English, Scandinavian, and Hebrew languages, and it is derived from Old English and Hebrew origins. From Old English roots, its meaning is Dane - in this context, Dana can be used in the English and Scandinavian languages. It is derived from the element 'dhen' which means low, flat. It represents the transferred use of the geographic name and the surname as a given name. See Dana for more information.

Dana is a variant (English) of the name Dane (English, Dutch, and Lithuanian).

Dana is also a variant (Hebrew) of Daniel.

Dain, Daina, Danah, and Dayna are variants of Dana.

Dana is an uncommon baby name for boys. At the modest height of its usage in 1962, 0.085% of baby boys were given the name Dana. Its ranking then was #172. The baby name has since fallen from favor, and is currently of irregular use. In 2018, within the group of boy names directly linked to Dana, Daniel was the most frequently used. There were times before 1954 when more boys than girls were named Dana, but currently it is more often than not a girl name. In 1997, girls named Dana outnumbered boys by 12 times. 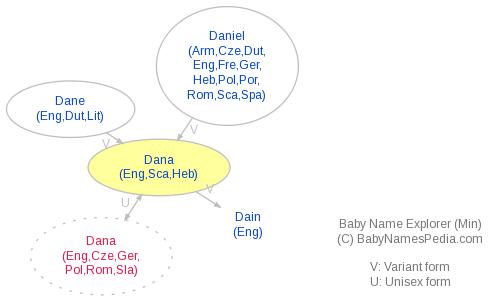