What does Dandy mean?

[ 2 syll. dan-dy, da-ndy ] The baby boy name Dandy is also used as a girl name. It is pronounced as DAENDiy †. Dandy is an English and Scottish name of Old Greek and English origin. English origin, English use: Its meaning is derived literally from the common word 'dandy'. The name was made popular by Sir Walter Scott, who named a rough but friendly farmer Dandie Dinmont in his novel Guy Mannering (1815). The Dandie Dinmont Terrier breed was later named after the fictional character, who owns a number of terriers in the novel.

In addition, Dandy is a diminutive form (English and Scottish) of the name Andrew (English, Greek, and Russian).

The name Dandie (English) is a variant of Dandy.

Dandy is rarely used as a baby name for boys. It is listed outside of the top 1000 names. Among the group of boy names directly linked to Dandy, Andrew was the most widely used in 2018. 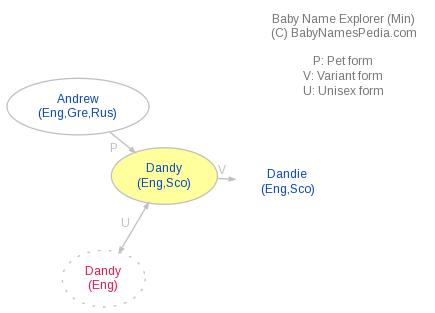