What does Dane mean?

[ 1 syll. da-ne, dan-e ] The baby boy name Dane is sometimes used as a girl name. Its pronunciation is Dey-N †. Dane is used predominantly in the English, Dutch, and Lithuanian languages, and it is derived from Old English and Hebrew origins. From Old English roots, its meaning is dean; valley - in this context, Dane can be used in the English language. It is from the elements 'dean' ; 'decanus' meaning dean ; 'denu' valley. The first name is derived from the surname, which itself developed as a dialect variant of Dean in south-east England.

In addition, Dane is a variant (Dutch and Lithuanian) of Daniel.

Dane is a classic favorite. Today it is still somewhat popular as a baby name for boys, though not to the extent it was previously. The name's popularity rose from the 1940s up to the 1980s; before that, it was of irregular use only. At the modest height of its usage in 1986, 0.056% of baby boys were given the name Dane. It ranked at #220 then. The baby name has since experienced a loss in popularity. In 2018, its usage was 0.016% and its ranking #756. Within the group of boy names directly linked to Dane, Daniel was the most popular. In 2018, it was used 36 times more than Dane. Dane has in the past century been mostly given to baby boys. 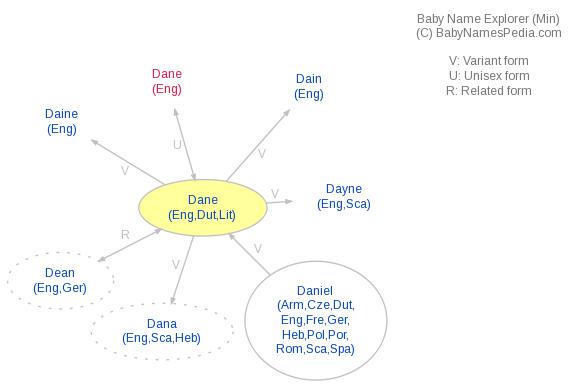