What does Dania mean?

[ 2 syll. da-nia, dan-ia ] The baby girl name Dania is pronounced as DAENYaa- †. Dania is used mostly in Hebrew, Scandinavian, German, and English. Its language of origin is Old English, Hebrew, and Slavonic.

Dania is a derivative of the English, Czech, German, Polish, Romanian, and Slavic name Dana.

Dania is also a familiar form (Hebrew and Scandinavian) of Daniela.

Dania is also a spelling variant (German) of the German and Albanian name Danja.

Dania is also a derivative (English and Hebrew) of the English, Russian, and Hebrew name Danya.

Dania is an uncommon baby girl name. At the modest height of its usage in 2007, 0.015% of baby girls were named Dania. It was #889 in rank then. The baby name has seen a steep decline in frequency since then, and is currently used on a very light scale. In 2018, within the family of girl names directly related to Dania, Daniela was the most popular. 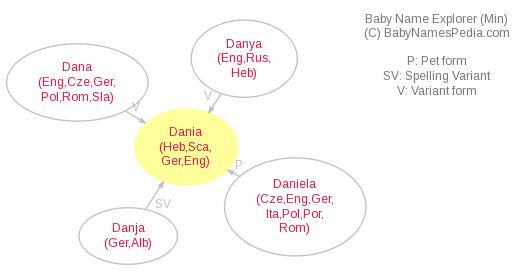