What does Daniel mean?

[ 2 syll. da-niel, dan-i-el ] The baby boy name Daniel is pronounced as DAEN-YahL in English, DaeN-YEHL in French, DAA-Niy-ehL in German, Daa-Niy-EHL in Hebrew, or DAAN-YehL in Polish †. Daniel is an Armenian, Czech, Dutch, English, French, German, Hebrew, Polish, Portuguese, Romanian, Scandinavian, and Spanish name of Hebrew origin. The name is of the meaning God is my judge, God has judged. A biblical name, it is derived from the elements 'dan' meaning judge ; 'el' God, powerful. Daniyel (Hebrew) is an older form of Daniel. In the Bible, the name was borne by the prophet who rose to prominence for his skills in interpreting dreams. His experiences were recorded in the Book of Daniel of the Old Testament, including his famous escape from the lions' den. The name was first adopted by ecclesiastical English speakers prior to the Norman Conquest, before gaining ground among the wider population by the Middle Ages. It dropped from favor after the 15th century but was revived by the Reformation as it is a biblical name. The name has also been popular with both Jews and Gentiles. The Irish name Domhnall and the Welsh Deiniol are often Anglicized as Daniel. In literature, the name has appeared in Daniel Deronda (1876), a novel by George Eliot, and 'Danny, the Champion of the World' (1975), the children's book by Roald Dahl. The name Daniela (Czech, English, German, Italian, Polish, Portuguese, and Romanian) is the female equivalent of Daniel.

What are the Variant Forms of Daniel?

Daniel is very popular as a baby name for boys. The name's popularity jumped from the 1900s up to the 1980s; before that, it was of occasional use only. At the height of its usage in 1985, 2.003% of baby boys were given the name Daniel. Its ranking then was #5. The baby name has since experienced a loss in popularity. In 2018, its usage was 0.579% and its ranking #15, but it was nonetheless the most popular within all boy names in its group. In 2018, Daniel was used 22 times more than the next ranked name, Danny. Daniel has predominantly been a baby boy name, though in the past century it has also been used for girls. In 1989, Daniel as a baby boy name outnumbered its use as a girl name by 176 times. 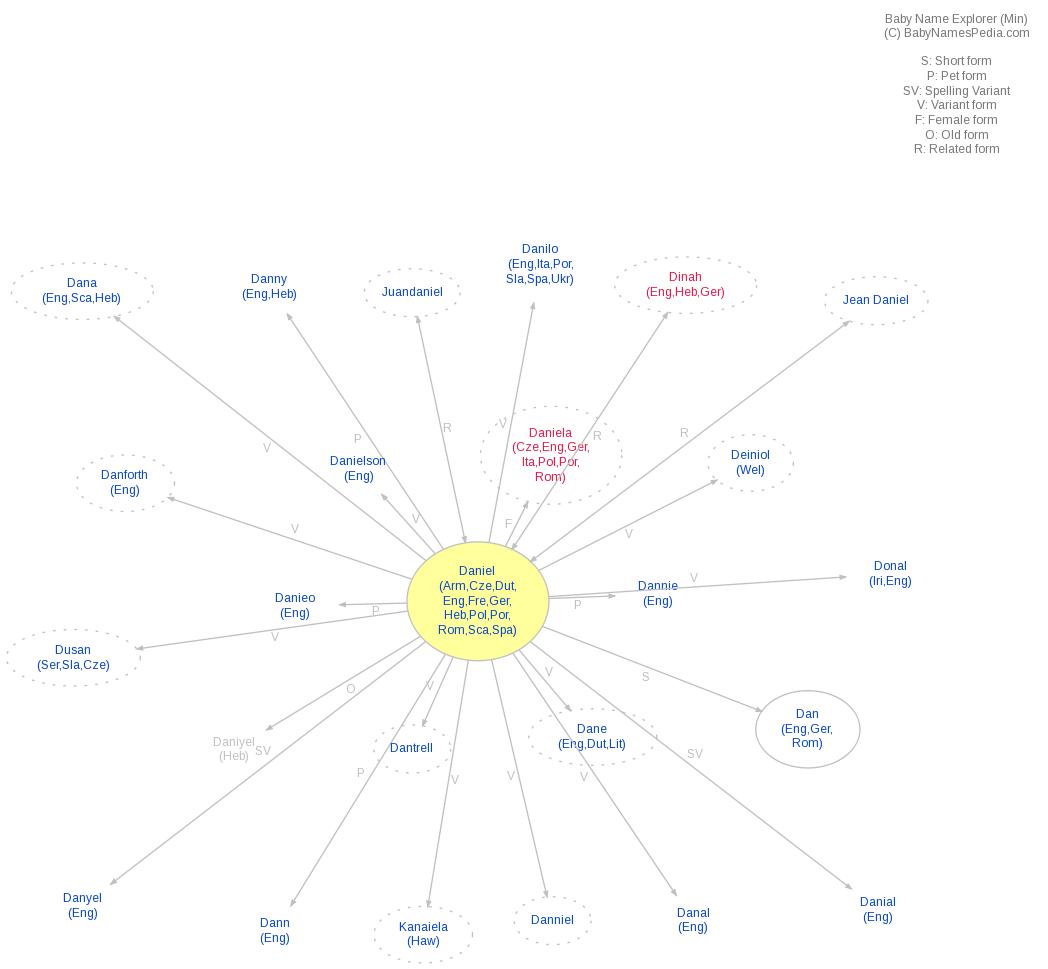