What does Daniela mean?

[ 3 syll. da-nie-la, dan-i-ela ] The baby girl name Daniela is also used as a boy name, though it is far more popular for girls. It is pronounced in German and Polish as DaaN-YEH-Laa †. Daniela has its origins in the Hebrew language. It is used largely in Czech, English, German, Italian, Polish, Portuguese, and Romanian. The name Daniela means 'God is my judge, God has judged'. It is a biblical name derived from dan which means 'judge' ; el 'God, powerful'. The generic name has been used in the Old Testament of the Bible. Daniela is the feminine form of the Armenian, Czech, Dutch, English, French, German, Hebrew, Polish, Portuguese, Romanian, Scandinavian, and Spanish Daniel.

The name Daniela is used to a great extent; it has 48 forms that are used in English and foreign languages. English forms of the name include Danela, Danele, Danell, Danella, Danelle, Daniellah, Danielle (used in French too), Danila (used in Russian and Slavic too), Danilla, Danille, Dannette, Dannilla, and Tanielle. Other English forms include the shortenings Dan and Danie, the diminutives Dandie, Dandy, Danee, Danette, Dani, Dann, Danni, Dannie, Danny, and Dee, and the spelling variants Daniell (used in French too), Danniell, Dannielle, Danyel, Danyell, and Danyelle.

Daniela is popular as a baby girl name. The name grew in popularity from the 1970s up to the 2000s; prior to that, it was of only very modest use. Its usage peaked in 2003 with 0.154% of baby girls being named Daniela. It had a ranking of #112 then. The baby name has experienced a decline in frequency since then. In 2018, it ranked at #195 with a usage of 0.084%, but it was nevertheless the most popular among all girl names in its family. Daniela was 85% more commonly used than the 2nd most popular name, Daniella, in 2018. Daniela has mainly been a baby girl name in the last century. 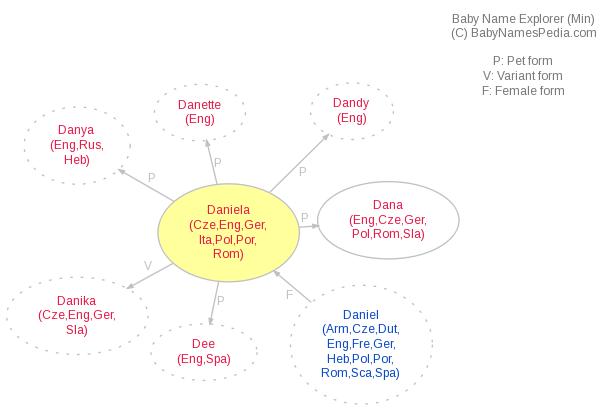