What does Dankmar mean?

[ 2 syll. dan-kmar, da-nkm-ar ] The baby boy name Dankmar is pronounced as DAE-NGKMaaR †. Dankmar is used chiefly in German and its origin is Germanic. A two-element name, it is derived from the words 'meri' meaning great, famous. The name was borne by Thankmar or Tammo (908-938), the eldest son of Henry I of Germany and his first wife.

The name Tammo (Frisian and German) and the name Thankmar (German) are variants of Dankmar.

Dankmar is not popular as a baby boy name. It is not listed within the top 1000. 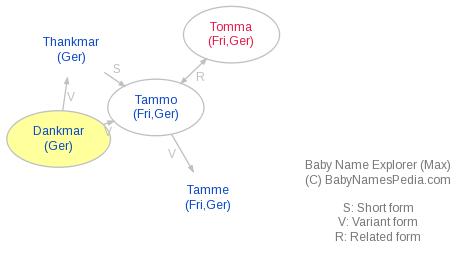