What does Danny mean?

[ 2 syll. dan-ny, da-nny ] The baby boy name Danny is sometimes used as a girl name. It is pronounced as DAEN-iy- †. Danny is used chiefly in the English and Hebrew languages, and it is derived from Hebrew, Old English, English, and Latin origins.

Danny is a diminutive form of the name Dan (English, German, and Romanian) in the English and Hebrew languages.

Danny is also a diminutive form of the name Danforth (English).

Danny is also a variant of the name Dangelo (English).

Danny is also a diminutive form of Daniel in the English language.

Danny is also a variant of the name Dante (English, German, and Italian).

Danny is a classic favorite. At present it is still fairly popular as a baby name for boys, though to a lesser extent than it was in the past. The name's popularity jumped from the 1910s up to the 1940s. Its usage peaked modestly in 1948 with 0.450% of baby boys being given the name Danny. It ranked at #39 then. The baby name has since markedly declined in popularity. In 2018, its usage was only 0.027% and its ranking #540, but it was nonetheless the 3rd most popular after Daniel and Dante, among all boy names in its group. In 2018, Daniel was used 22 times more than Danny. Danny has in the past century been mostly given to baby boys. 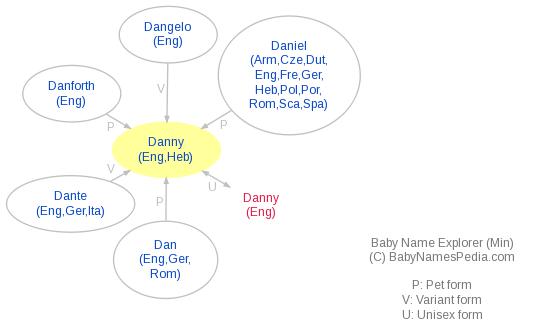