What does Darby mean?

[ 2 syll. dar-by, da-rby ] The baby boy name Darby is also used as a girl name, with the latter form being somewhat more common. Its pronunciation is DAARBiy- †. Darby is largely used in the English language and its origin is Old Norse. The name's meaning is deer town, farmstead where deer are kept. It is from the elements 'diur' meaning deer ; 'býr' town, village, settlement. Derby (Old Norse) is an old form of Darby. The first name is derived from the English surname, which is from a local name for someone living in the city Derby or West Derby in Liverpool; the place names are of Old Norse origin. The given name was first adopted in medieval times. The term 'Darby and Joan' was mentioned in a 1735 poem by Henry Woodfall in The Gentleman's Magazine, and it has since been used as a symbol of an elderly married couple leading a happy and peaceful life; in England, senior citizen clubs are called Darby and Joan Clubs. In Ireland, the name is sometimes seen as an Anglicization of Dermot or Diarmaid.

Darby is rare as a baby name for boys. At the modest peak of its usage in 1970, 0.007% of baby boys were given the name Darby. It ranked at #722 then. The baby name has since fallen in popularity, and is now of irregular use. Out of all boy names in its group, Darby was nonetheless the most widely used in 2018. Though Darby is slightly more popular as a girl name today, there was a period from 1968 to 1974 that it was given more often to boys. From 1994 on, increasingly more girls than boys were named Darby. 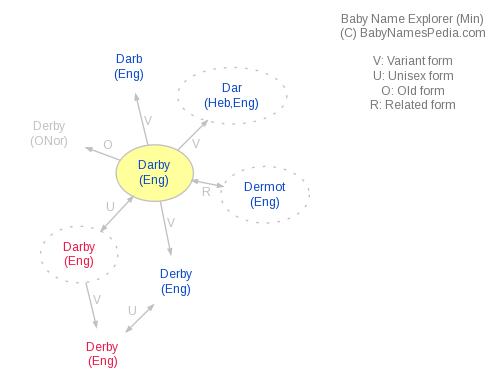