What does Darcy mean?

[ 2 syll. dar-cy, da-rcy ] The baby boy name Darcy is also used, and more frequently so, as a girl name. Its pronunciation is DAARSiy- †. Darcy is used predominantly in the English language and its origin is Old French. The name's meaning is from Arcy. The first name is derived from the baronial surname D'Arcy introduced into Britain during the Norman Conquest. The surname was borne by Norman barons who came from the town of Arcy in northern France and attacked Ireland after the conquest of England in 1066. The town name is itself of the Latin element 'arx'. The somewhat aristocratic name has been used by English speakers since the 19th century, its popularity given a boost by the handsome fictional aristocrat Fitzwilliam Darcy from the Jane Austen novel Pride and Prejudice (1813).

Darcy is an uncommon baby name for boys. At the modest height of its usage in 1970, 0.004% of baby boys were given the name Darcy. It ranked at #896 then. The baby name has since experienced a loss in popularity, and is currently of sporadic use. Within all boy names in its group, Darcy was nonetheless the most regularly used in 2018. In the past century Darcy has mostly been a girl name. In 1970, the name Darcy was given to 9 times as many girls than boys. 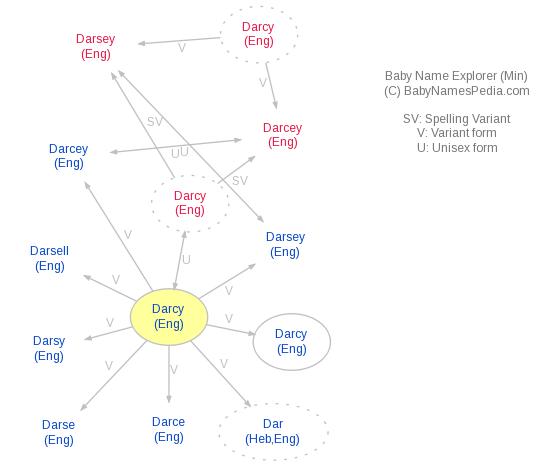