What does Dardan mean?

Dardan's origin, as well as its use, is in the Albanian language. The first name is derived from the name of a Thraco-Illyrian tribe who lived in Dardania, a region that corresponds to modern day Kosovo and part of the Republic of Macedonia. The tribal name could ultimately be of the element 'dardha', or else it could be of Greek roots. The name Dardana (Albanian) is the female version of Dardan.

The origin and meaning of Dardan is inherited by all variant forms.

Dardan's language of origin is Old Greek. It is derived from the word dardapto meaning 'to devour'. Dardanos (Old Greek) is an original form of Dardan. In Greek mythology, Dardanos was the brother of Harmonia and son of Zeus and Electra who founded Dardania; his name could be from the Greek 'dardapto'. 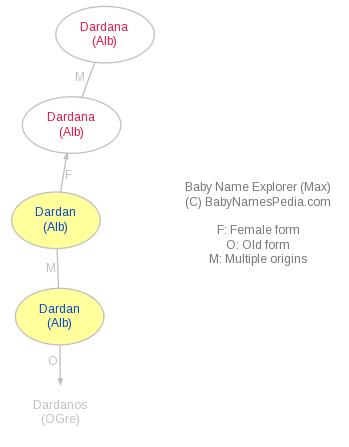