What does Darius mean?

[ 3 syll. da-riu(s), dar-i-us ] The baby boy name Darius is pronounced as DAER-iy-ahS, Dah-RAY-ahS or DEHR-iy-ahS (English) †. Darius is used chiefly in the English, German, Iranian, and Lithuanian languages, and its origin is Old Persian. The name is of the meaning protector, wealthy, possessor of good, upholder of good. It is derived from the elements 'daraya' meaning to possess, to hold, to maintain ; 'vahu' good, well. Dareios (Old Greek), Darius (Latin), and Dârayavahush (Old Persian) are old forms of Darius. The name was borne by several Persian kings, including Darius I the Great (549BC-486BC) who restored the heritage of Cyrus the Great in the empire, and his great-grandson Darius III (380BC-330BC), who lost the empire to Alexander the Great. It was also borne by an early Christian martyr. The name Daria (English, German, Italian, Polish, Romanian, and Russian) is the female form of Darius.

The name Darius is widely used; it has 31 variants that are used in English and other languages. Variants used in English include Darian, Darias, Darien, Dariess, Dario (also used in Italian and Polish), Darion, Darious, Darioush, Dariuse, Dariuss, Darrian, Darrien, Darrion, Darrius, Darrus, Darus, Daryos, Derius, Derrias, Derrious, Derrius, and Ladarius. The contraction Daris, and the pet form Derry are other English variants.

Darius is a fairly popular baby name for boys. The name's popularity jumped from the 1950s up to the 1990s. At the peak of its usage in 1994, 0.107% of baby boys were given the name Darius. Its ranking then was #155. The baby name has since experienced a fall in popularity. In 2018, its usage was 0.029% and its ranking #509, but it was nonetheless the most popular out of all boy names in its group. In 2018, Darius was twice as popular as the next most popular name, Darian. 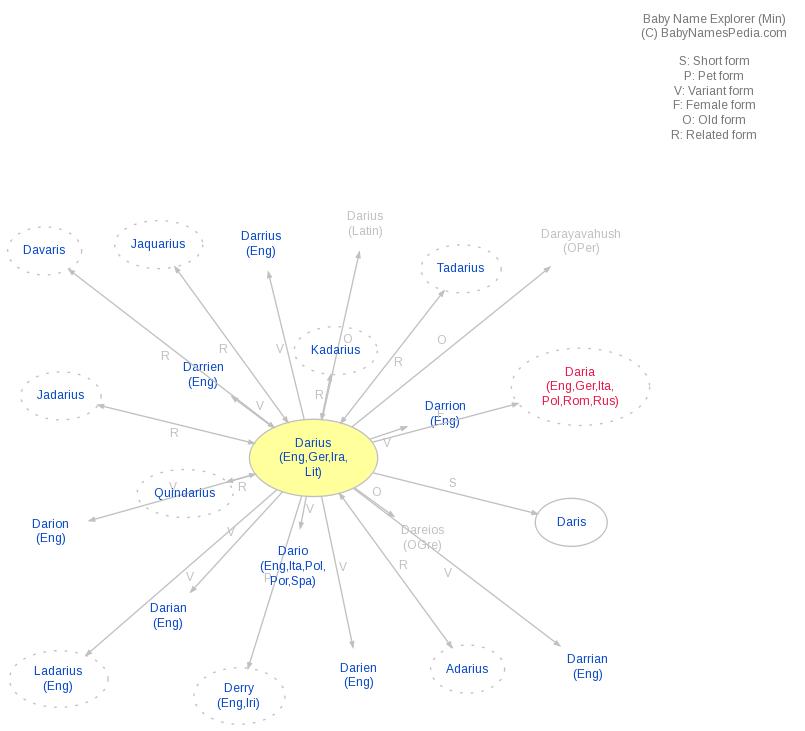