What does Darren mean?

[ 2 syll. dar-ren, da-rr-en ] The baby boy name Darren is sometimes used as a girl name. It is pronounced as DEY-R-ehN or D-AHRehN †.

Darren is used predominantly in the English and Welsh languages, and it is derived from English origins. The name is of debated origin; it could have been a recent coinage, or it could have evolved as a variant of Darryl, or it could be of Gaelic or Greek origin. The name was first popularized by the US actor Darren McGavin (1922-2006). The form Darin was made known by the US singer Bobby Darin (born Walden Robert Cassotto, 1936-1973) who selected the name from a phone directory, while another form was made known by the central character Darrin in the popular 1960s US TV comedy series Bewitched.

Darren's language of origin is Irish Gaelic. Here, it means small and great.

Darren is a classic favorite. At present it is still fairly popular as a baby name for boys, though to a lesser extent than it was before. The name's popularity jumped from the 1950s up to the 1960s. At the modest peak of its usage in 1965, 0.313% of baby boys were given the name Darren. It ranked at #52 then. The baby name has since markedly declined in popularity. In 2018, its usage was only 0.020% and its ranking #652, but it was nonetheless the most popular out of all boy names in its group. In 2018, 47% more boys were named Darren than the next most popular name, Darian. 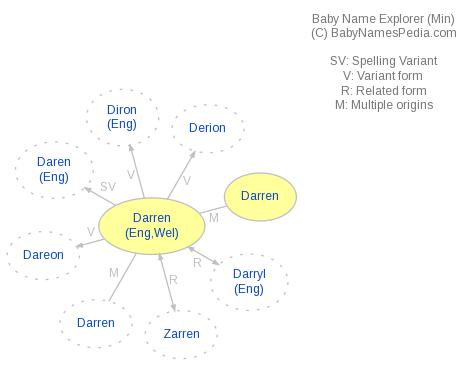