What does Daryl mean?

[ 2 syll. da-ryl, dar-yl ] The baby girl name Daryl is also used as a boy name, with the latter form being far more popular. It is pronounced as DEY-R-ahL or D-ahRIY-L †. Daryl's language of origin is English and Old French. It is predominantly used in English. From Old French roots, its meaning is 'from Airelle'. The name has been borne by women, possibly under the influence of names such as Cheryl. The fame of the US actress Daryl Hannah (1961-) has also promoted the feminine use of the name.

Daryl is a contracted form of the English Darlene.

What are the Variant Forms of Daryl?

Daryl is an unusual baby girl name. Its usage peaked in 1950 with 0.009% of baby girls being named Daryl. It was #665 in rank then. The baby name has experienced a decline in frequency since then, and is currently used only on a very modest scale. Among all girl names in its family, Daryl was nevertheless the most commonly used in 2018. In the last century Daryl has primarily been a boy name. In 1957, 14 times more boys than girls were given the name Daryl. 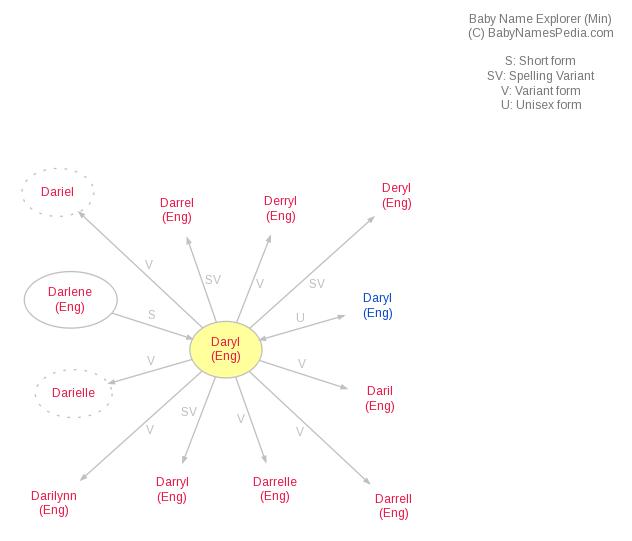