What does Dave mean?

[ 1 syll. da-ve, dav-e ] The baby boy name Dave is pronounced Dey-V †. Dave has its origins in the Hebrew, Old Norse, Unknown, and English languages, and it is used largely in English.

In addition, Dave is a contracted form (English) of David.

Dave is also a diminutive form of the English, Spanish, and Finnish Davin.

Dave is also a derivative of the English Davion.

Dave is also a derivative of the English and Spanish Davis.

A derivative of Dave is the Irish Daivi.

The origin and meaning of the name Dave is inherited by all variant forms.

Dave is rare as a baby name for boys. At the modest peak of its usage in 1959, 0.153% of baby boys were named Dave. It ranked at #119 then. The baby name has since substantially slipped in popularity, and is currently of only irregular use. In 2018, out of the group of boy names directly related to Dave, David was the most popular. 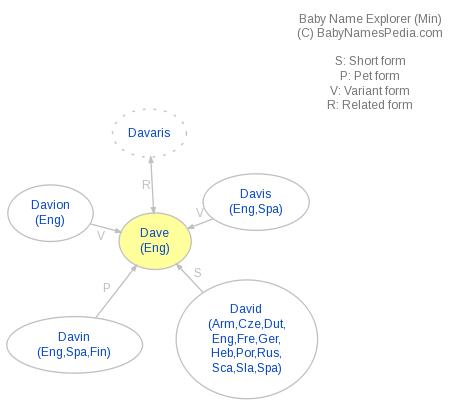