What does David mean?

[ 2 syll. da-vid, dav-id ] The baby boy name David is pronounced as DEY-VihD (English), DAA-VihT (Dutch), Dae-VIYD (French), DAA-FihT (German), Daa-VIYD (Hebrew), or Daa-VIYT (Russian) †. David is used chiefly in the Armenian, Czech, Dutch, English, French, German, Hebrew, Portuguese, Russian, Scandinavian, Slavic, and Spanish languages, and its origin is Hebrew. A biblical name, it is derived from the element 'dod' which means beloved, favorite, darling, friend. Dawid (Hebrew) and Dewydd (Old Welsh) are old forms of David. The name was borne in the Bible by the boy who killed Goliath the giant with a slingshot and subsequently became the greatest of the kings of Israel. David was also a poet who wrote many of the biblical Psalms. He had many descendants, including his son King Solomon, and many generations later, Jesus Christ. The name was first adopted by English speakers in the Middle Ages. In Britain, the name is common in Wales, as it was borne by Saint David (500-589) or Dewi, the patron saint of Wales, and by Dafydd ap Gwilym, a 14th-century Welsh poet. It has also been common in Scotland, having been borne by two medieval kings of Scotland, David I and David II. In literature, the name is most famous from the Charles Dickens semi-autobiographical novel David Copperfield (1850); it is also known from the fictional David Balfour in the Robert Louis Stevenson novel Kidnapped (1886). The name Davida (English and German) is the female form of David.

What are the Variant Forms of David?

David is a classic favorite. At present it is still very popular as a baby name for boys, though it was in more widespread use before. At the peak of its usage in 1955, 4.125% of baby boys were given the name David. It ranked at #2 then. The baby name has since experienced a loss in popularity, and is today of moderate use. In 2018, its usage was only 0.503% and its ranking #22, but it was nonetheless the most popular out of all boy names in its group. In 2018, 5 times more boys were named David than the next most popular name, Dawson. David has mostly been a baby boy name, though in the past century it has also been used for girls. In 1988, the name David was given to 136 times as many baby boys than girls. 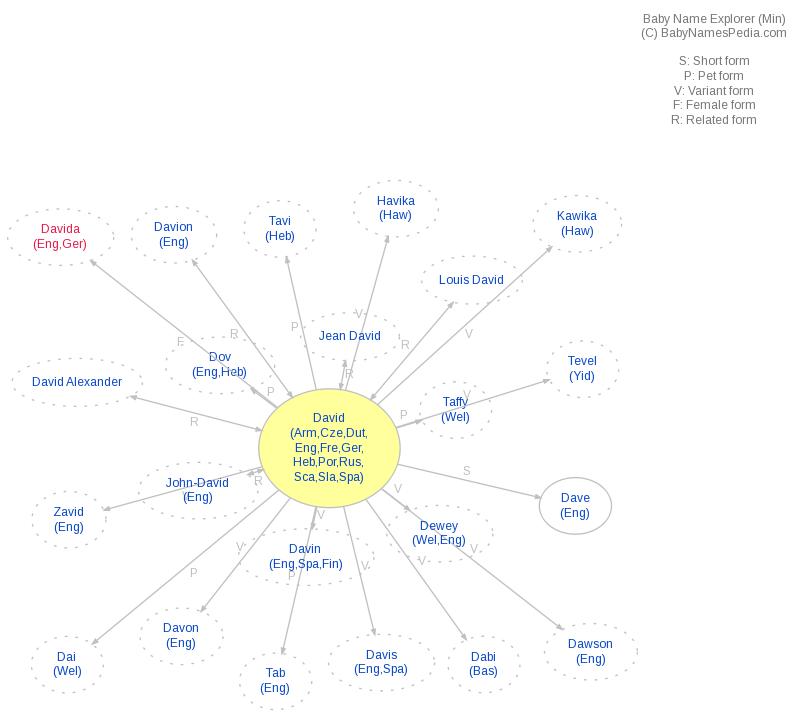