What does Davis mean?

[ 2 syll. da-vis, dav-is ] The baby boy name Davis is pronounced as DEY-VihS †. Davis is an English and Spanish name of Hebrew and English origin. From English roots, its meaning is son of David - in this context, Davis can be used in the English language. The first name is derived from the surname, which is itself from the first name David. The surname was borne by Jefferson Davis (1808-1889), the president of the Confederate States of America during the Civil War.

Davis is a derivative (English and Spanish) of David.

Another variant of the name is the English, Hebrew, and Scottish diminutive form Davy. 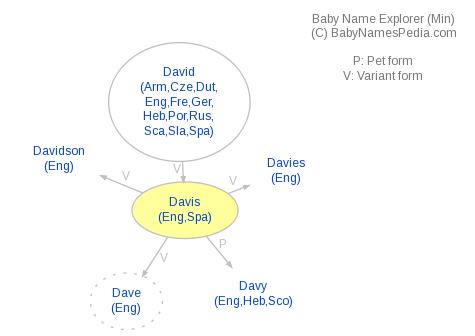