What does Dawson mean?

[ 2 syll. daw-son, da-ws-on ] The baby boy name Dawson is pronounced as DAO-SahN †. Dawson is used chiefly in the English language, and its origin is Hebrew and English. From English roots, its meaning is son of David. Its meaning is from the element 'son'. The first name is derived from the English surname. It was popularized by Dawson's Creek (1998-2003), a US primetime TV drama.

Dawson is a variant of David in the English language.

Other forms of Dawson include the variant spellings Dawsen (English) and Dawssen (English).

Dawson is a popular baby name for boys, and it is also viewed as trendy. The name jumped in popularity during the 1990s. Its usage peaked modestly in 1999 with 0.138% of baby boys being given the name Dawson. It ranked at #136 then. The baby name has since experienced a loss in popularity. In 2018, its usage was 0.108% and its ranking #194. Among the group of boy names directly linked to Dawson, David was the most frequently used. In 2018, it was used 5 times more than Dawson. 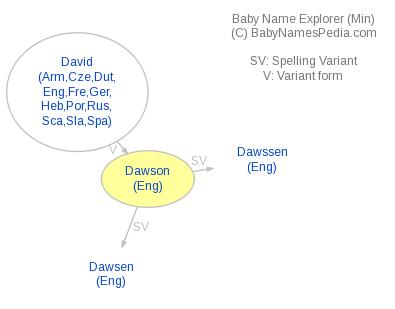