What does Dayton mean?

[ 2 syll. day-ton, da-yt-on ] The baby boy name Dayton is sometimes used as a girl name. Its pronunciation is DEY-TahN †. Dayton is used chiefly in the English language and its origin is Old English. The name's meaning is ditch town; dairy town. It is from the elements 'dic' meaning ditch, dike ; 'tun' town, settlement, homestead. The first name is derived from the surname, which is itself from an English place name for a town with a ditch or dike, or else a town involved in dairy work. In the USA, its use has been influenced by the Dayton family, whose members were prominent 18th- and 19th-century politicians and subsequently gave their name to various places in the USA. The adoption of the name has also been influenced by the name Dalton.

Dayton is somewhat popular as a baby name for boys. The name's popularity rose from the 1990s up to the 2000s. At the modest peak of its usage in 2008, 0.026% of baby boys were given the name Dayton. It ranked at #484 then. The baby name has since experienced a loss in popularity. In 2018, its usage was 0.013% and its ranking #843, but it was nonetheless the most regularly used out of all boy names in its group. Dayton has mostly been a baby boy name in the past century. 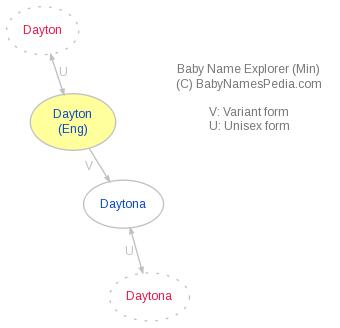