What does Dean mean?

[ 1 syll. dea(n), de-an ] The baby boy name Dean is pronounced as Diy-N †. Dean is largely used in the English and German languages, and it is derived from Old English origins. The name is of the meaning dean; valley. It is derived from the elements 'dean' ; 'decanus' meaning dean ; 'denu' valley. The first name could be from the surname and job title for someone who worked as a church dean; the word 'dean' is itself from the Latin decanus. The surname could also have been originally given for someone living in a valley or a place named with the Old English element 'denu'. The given name was first used in the USA at the end of the 19th century, and it was later popularized by the US actor and cultural icon James Dean (1931-55). The name Deana (English) is the female equivalent of Dean.

Dean has 17 variants that are used in English and other languages. Variants used in English include Deanea, Deanee, Deaney, Deani, Deanie, Deans, Deany, Deen, Deene, Deens, Deyn, Deyne, Dyn, and Dyne. The variant spellings Deane and Dene are other English forms. A variant of Dean in other languages is Dino (Italian).

Dean is popular as a baby name for boys, and it is also viewed as trendy. The name's popularity jumped from the 1900s up to the 1960s. At the modest peak of its usage in 1961, 0.229% of baby boys were given the name Dean. Its ranking then was #84. The baby name has since declined in popularity. In 2018, its usage was 0.116% and its ranking #173, but it was nonetheless the most popular out of all boy names in its group. In 2018, Dean was more commonly used than the subsequent ranked name, Dane, by 7 times. The name Dean has predominantly been a baby boy name, though it has also been given to girls in the past century. In 1937, baby boys named Dean outnumbered girls by 26 times. 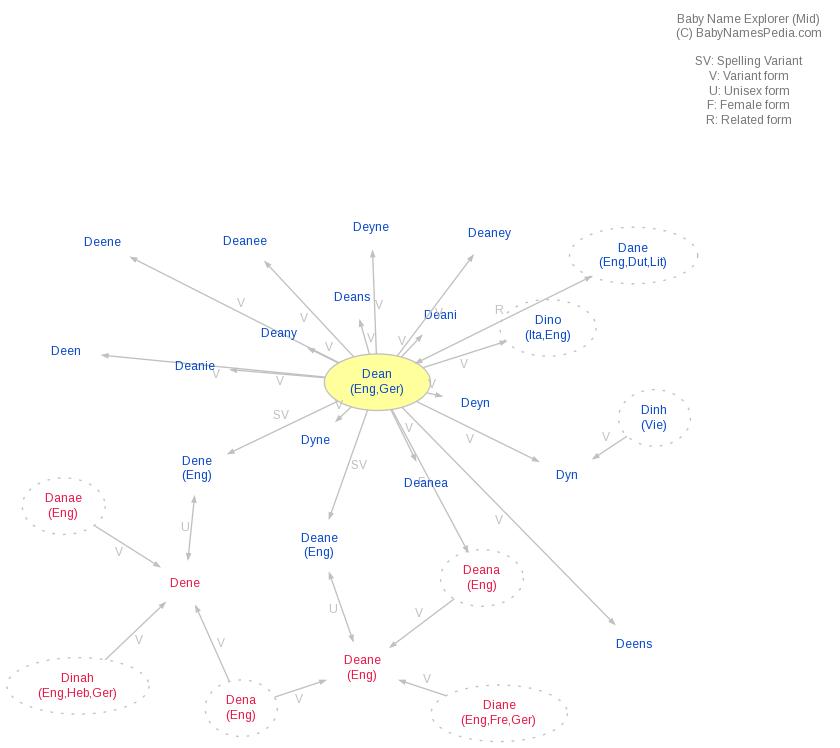