What does Declan mean?

[ 2 syll. de-clan, dec-l-an ] The baby boy name Declan is pronounced as DEH-KLaeN †. Declan is largely used in the English and Irish languages, and its origin is Celtic. The name is Anglicized from the Gaelic Deaglán, which is of obscure meaning. It was borne by the 5th-century Saint Declan, a disciple of Saint Colman and missionary to Ireland. The name saw a revival among the Irish in the mid-20th century. The name Decla (English and Irish) is the female equivalent of Declan.

Dec (English and Irish contraction) is another variant of Declan.

Declan is a popular baby name for boys, and it is also viewed as trendy. The name's popularity has been rising since the 1990s; before that, it was of very modest use only. At the recent peak of its usage in 2018, 0.197% of baby boys were given the name Declan. Its ranking then was #101. Out of all boy names in its group, Declan was the most frequently used in 2018. 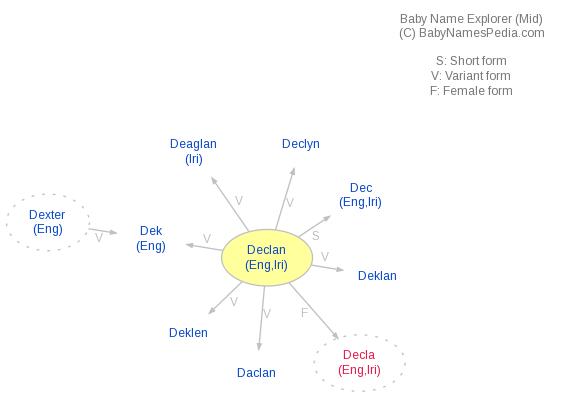