What does Dedrick mean?

[ 2 syll. de-dric(k), ded-ri-ck ] The baby boy name Dedrick is pronounced as DEH-DRihK †. Dedrick has its origins in the English and Gothic languages, and it is used largely in English. From English roots, its meaning is 'ruler of the people'. The first name is derived from the English surname, which is itself from the first name Dietrich. It is popular with Afro-Americans.

Dedrick is an English form of the German, Romanian, and English Dietrich.

Dedrick is also a form of the English Theodoric.

Dedrick is unusual as a baby name for boys. Its usage peaked modestly in 1977 with 0.009% of baby boys being named Dedrick. Its ranking then was #701. The baby name has since experienced a decline in popularity, and is used only on an infrequent scale now. Among all boy names in its group, Dedrick was nevertheless the most popular in 2018. 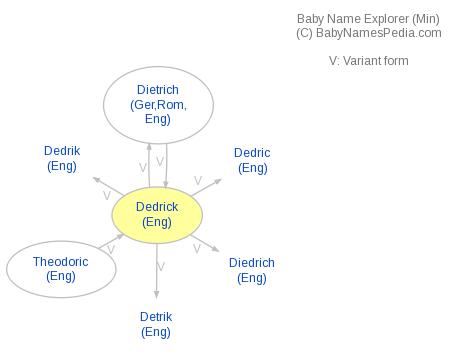