What does Deirdre mean?

[ 2 syll. dei-(r)dre, de-ird-re ] The baby girl name Deirdre is pronounced as DIYR-DRah or DIYR-DRiy (English) or DEHR-DReh (Irish) †. Deirdre is used mostly in the English, Gaelic, and Irish languages, and it is of Celtic origin. The name is of the meaning raging; broken-hearted. The origin of the name is debated; it could be from the element 'deardan' thus suggesting 'raging', or else it could mean 'broken-hearted' from folk etymology. In Celtic legend, Deirdre of the Sorrows was a tragic Irish folk heroine whose beauty caused the demise of many heroes. The popularity of the name was boosted in the 20th century following popular retellings by W. B. Yeats' poems (1907) and J. M. Synge's play Deirdre of the Sorrows (1910). The heroine was sometimes associated with the suffering of the Irish under English rule, but this did not appear to have stopped English speakers from using the name.

Deirdre is a rare baby name for girls. At the modest peak of its usage in 1961, 0.038% of baby girls were given the name Deirdre. Its ranking then was #333. The baby name has since fallen from favor, and is currently of sporadic use. Out of all girl names in its group, Deirdre was nonetheless the most popular in 2018. 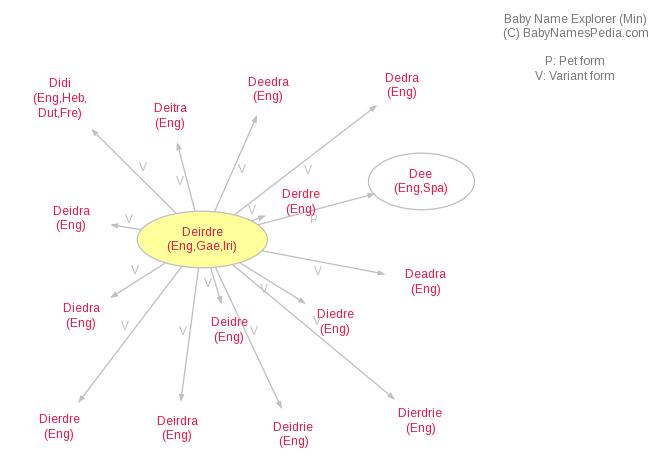