What does Delaney mean?

[ 3 syll. de-la-ney, del-an-ey ] The baby girl name Delaney is also used as a boy name, though it is far more popular for girls. It is pronounced Deh-LEY-N-iy- †.

Delaney has its origins in the Old French language and it is used largely in English. The name Delaney means 'from the alder grove'. It is from aunaie meaning 'alder grove' ; aulne 'alder'. The first name is derived from the English surname which is of the Norman French surname "De l'aunaie", or else it could be from Irish roots.

What are the Variant Forms of Delaney?

Delaney's language of origin is Celtic. Here, it means 'descendant of Dubhshláine'. The first name is derived ultimately from the Gaelic surname Ó Dubhshláine.

In addition, Delaney is a form of the English and French Adeline.

Delaney is popular as a baby girl name. The name grew in popularity from the 1990s up to the 2000s; prior to that, it was of only infrequent use. Its usage peaked modestly in 2004 with 0.099% of baby girls being named Delaney. It had a ranking of #169 then. The baby name has experienced a drop in popularity since then. In 2018, it ranked at #248 with a usage of 0.071%, but it was nevertheless the 2nd most popular after Adeline, among all girl names in its family. The name was thrice as popular as Delaney in 2018. 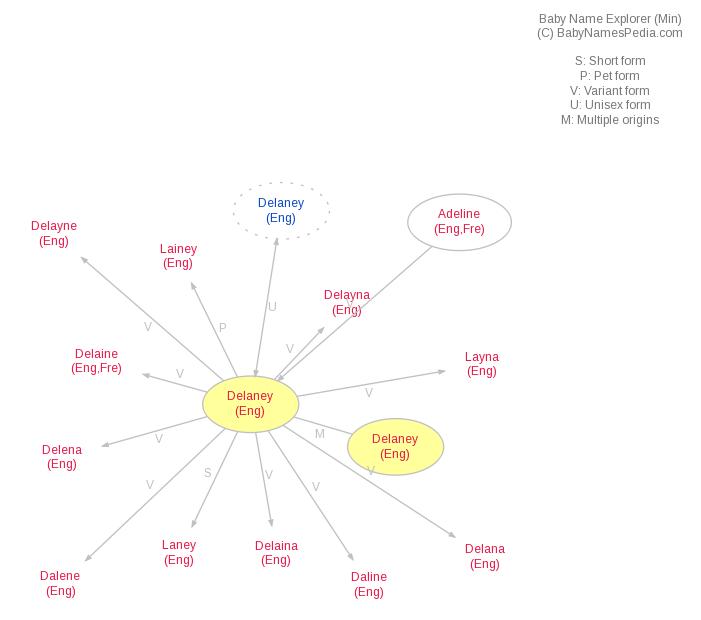