What does Delbert mean?

[ 2 syll. del-ber(t), de-lbe-rt ] The baby boy name Delbert is pronounced as DEHLBah-T †. Delbert is used chiefly in the Dutch and English languages, and its origin is Germanic and English. The name is possiby a modern English coinage from the prefix 'Del-' combined with '-bert' from Germanic names with the element 'berht', or else it could be a form of Adelbert introduced to English speakers by immigrants of Dutch roots. In recent times, the name is famous in the UK from the fictional comic character of the Brixton DJ Delbert Wilkins (1990s) created by the comedian Lenny Henry, while in the USA the form Dilbert (1989-) is famous from the Scott Adams comic strip.

Variant forms share both the origin and meaning of Delbert.

Delbert is uncommon as a baby name for boys. At the modest height of its usage in 1932, 0.097% of baby boys were given the name Delbert. Its ranking then was #151. The baby name has since experienced a marked fall in popularity, and is today of very light use. Within the group of boy names directly linked to Delbert, Albert was the most popular in 2018.

A baby name that sounds like Delbert is the name Dalapati (Indian). 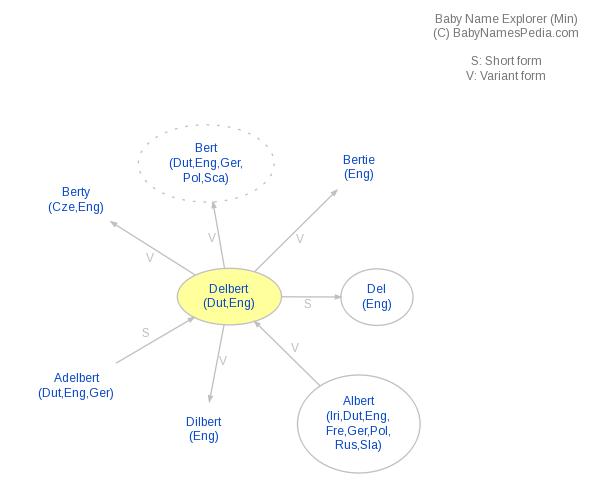