What does Delilah mean?

Delilah is largely used in the English and German languages, and it is derived from Hebrew origins. The name is of the meaning weak, poor; delight. The name is of obscure origin; it could be from the Hebrew element 'dal' (meaning weak, poor) or the Hebrew for 'delight', or else it could be of Arabic roots. It was borne in the Bible by the cunning lover of Samson who betrayed him to the Philistines by trimming his hair and leaving him vulnerable. The name was nevertheless adopted by English Puritans in the 17th century, perhaps because she was also described as a beautiful and intelligent woman. The name has been publicized by Saint-Saens' opera Samson and Delilah (1877), two songs titled 'Delilah' (1917 and 1968), and a recent song titled 'Hey there Delilah' (2006).

Delilah has 15 variant transcriptions that are used in English and other languages. Variation transcriptions used in English include Dalia, Dalialah, Dalyla, Dalylah, Del, Delilia, Della, Delyla, and Delylah. The contractions Lila (also used in Arabic and Hebrew) and Lilah, and the variant spelling Delila (also used in German, and Hebrew) are other English forms. Dalida (French) and Dalilah (French) are foreign variant transcriptions of Delilah. Another foreign form is the variant spelling Dalila (French and Italian).

Delilah's language of origin is Arabic. It is derived from the word 'dalla' with the meaning to tease, to flirt.

Delilah is a popular baby girl name, and it is also perceived as trendy. The name has been rising in popularity since the 1990s. At the modest peak of its usage in 2018, 0.162% of baby girls were named Delilah. It was #94 in rank then. Out of all girl names in its family, Delilah was the most popular in 2018. Delilah was twice as popular as the 2nd most popular name, Lila, in that year. 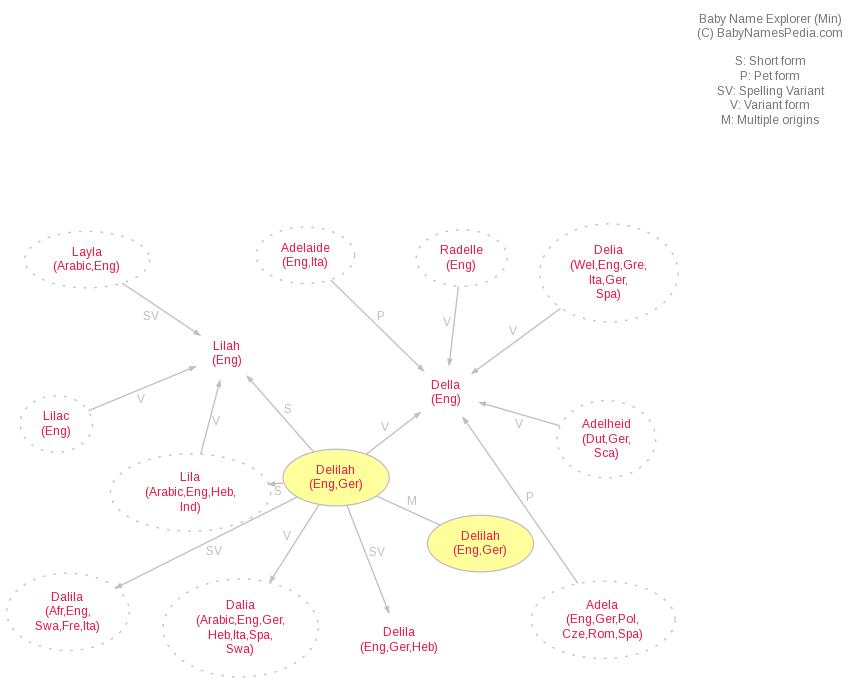