What does Delphina mean?

[ 3 syll. del-(p)hi-na, de-lph-ina ] The baby girl name Delphina is pronounced DehLFIY-Nuw- or DEHLFiy-Nuw- †. Delphina has its origins in the Old Greek language. It is used largely in English and German. The name Delphina means 'from Delphi; dolphin'. An old form of the name is Delphina (Latin). Delphi was an ancient city in Greece; the place name is probably of the Greek element delphis. Blessed Delphine of Sabran was a 13th-century Provençal nun named after the 5th-century Saint Delphinus of Bordeaux. The name was later promoted by Madame de Staël's novel Delphine (1802), which explored women's freedom in aristocratic society. In recent times, the name has sometimes been chosen for its association with the delphinium or larkspur flower, which has dolphin-shaped nectaries. The name has been popular among Afro-Americans. Delphina is the feminine equivalent of the Latin Delphinus.

Delphina has 16 forms that are used in English and foreign languages. English forms of Delphina include Dauphin, Delfa, Delfin, Delfine (also used in French), Delfyne, Delpha, Delphene, Delphi, Delphia, Delphine (also used in French), Delphinea, Delphinia, Delphyne, and Delvene. Another English variant is the contracted form Del. The Italian and Spanish Delfina is a form of the name that is used in foreign languages.

Delphina is uncommon as a baby girl name. It is not in the top 1000 names. 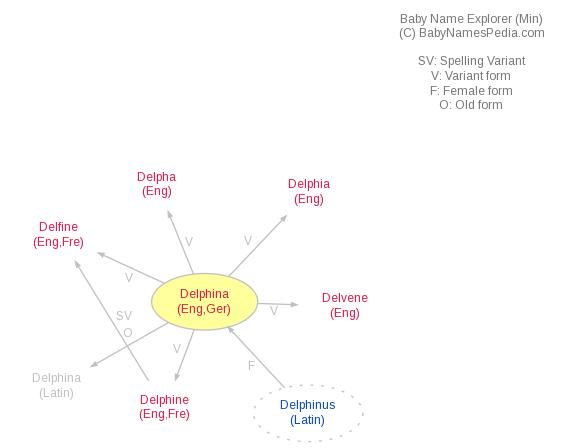