What does Demetria mean?

[ 4 syll. de-me-tria, dem-etr-ia ] The baby girl name Demetria is pronounced Deh-MIY-TRiy-aa- †. Demetria's origin is Old Greek, and its use, English and Italian. The meaning of Demetria is 'follower of Demeter'. It is a biblical name derived from de meaning 'earth' ; meter 'mother'. The short form of the name is best known from the actress Demi Moore (1962-).

Demetria is a form of the English and Greek Demeter.

Demetria is the feminine version of the English Demetrius.

Demetria has 21 forms that are used in English and foreign languages. English forms of the name include Demeta, Demeter, Demeteria, Demetras, Demetrias, Demetrice, Demetris, Demetrius, Demita, Demitra, Demitria, Detria, Dimetra, and Dymitra. Other English forms include the contracted forms Deitra, Demetra (also used in Greek), Demi (also used in French, and Greek), and Tria, and the spelling variant Dimitria. The Greek Dimitra is a form of Demetria that is used in foreign languages. The contracted form Demy (Dutch) is another foreign variant.

Demetria is uncommon as a baby girl name. At the modest height of its usage in 1973, 0.024% of baby girls were named Demetria. It was #484 in rank then. The baby name has fallen out of favor since then, and is currently of only irregular use. Within the family of girl names directly related to Demetria, Demi was the most popular in 2018. 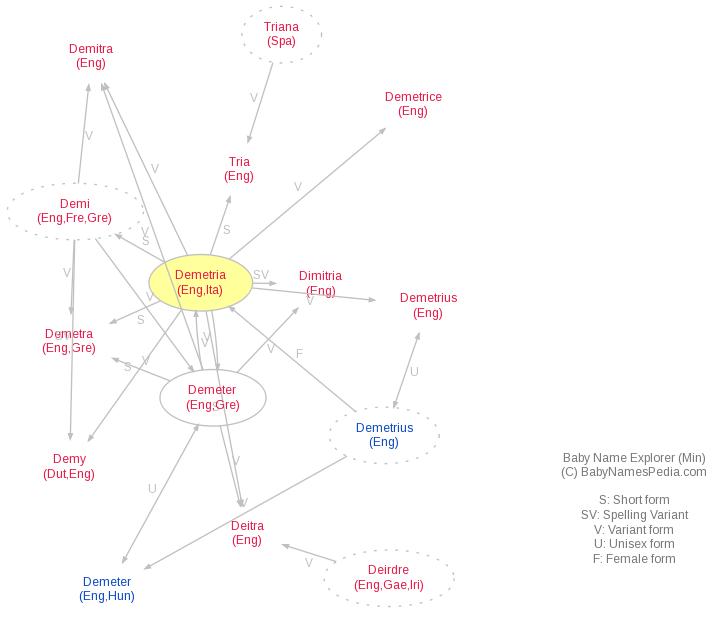