What does Dena mean?

Dena's language of origin is Hebrew, Old English and it is used mainly in the English language. The name is a recent coinage, possibly from the short form of names ending in '-dena'.

Variant forms inherit the origin and meaning of the name Dena.

Dena's language of origin is African-Hausa. Meaning: 'to cease'.

In addition, Dena is an English form of the German, English, and Hebrew Adina.

Dena is also a form of the English Deana.

Dena is also an English variant spelling of the Polish, Greek, English, German, and Scottish Dina and an English form of the English, Hebrew, and German Dinah.

Dena is unusual as a baby name for girls. Its usage peaked in 1970 with 0.084% of baby girls being given the name Dena. It ranked at #208 then. The baby name has since experienced a substantial decline in frequency, and is used only on a very modest scale now. Among all girl names in its group, Dena was nonetheless the most widely used in 2018. 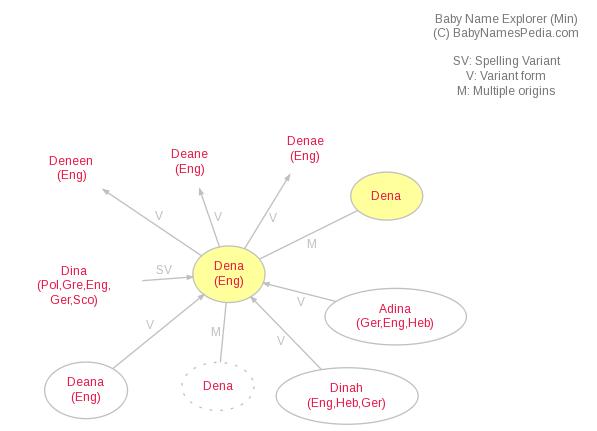