What does Denzel mean?

[ 2 syll. den-zel, de-nz-el ] The baby boy name Denzel is pronounced DEHNZuwL †. Denzel's language of origin is Celtic and it is used largely in the English language. The meaning of the name is 'fort; fertile land'. The first name is derived from the Cornish surname, or else it could be of German roots. The Cornish surname was originally given to someone living in Denzell in Cornwall, England; the ultimate meaning of the place name is uncertain, probably 'fort' or 'fertile land'. The given name was first used in the 16th century, after the Holles and Denzell family were associated in marriage; the most notable bearer was the English statesman Denzil Holles (1599-1680). The name has since spread outside Cornwall, and is today best known in a variant form from the actor Denzel Washington (1954-), who was named after his father.

Denzel is rare as a baby boy name. At the peak of its usage in 1993, 0.042% of baby boys were given the name Denzel. It was #310 in rank then. The baby name has substantially fallen in popularity since then, and is of only very modest use today. Out of all boy names in its family, Denzel was nonetheless the most regularly used in 2018. 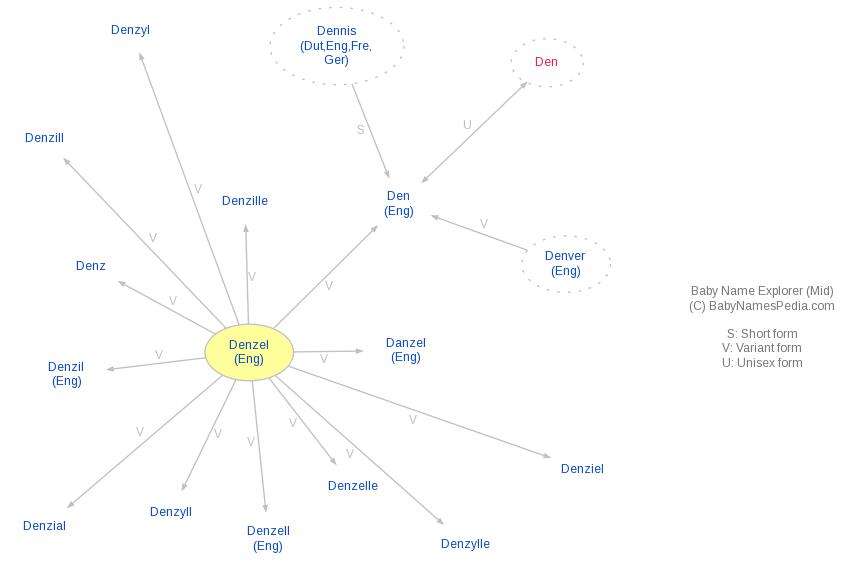