What does Deondre mean?

[ 3 syll. deo-(n)dre, de-ond-re ] The baby boy name Deondre is pronounced Diy-AANDRey- †. Deondre's language of origin is English-American and English. It is predominantly used in the English language. The name is a recent coinage probably from the combination of the name component 'De-' and the name Andre, much like Deandre.

Deondre is a variant form of the English Deandre.

A variant form of Deondre is the name Deondray.

Variant forms share the origin and meaning of the name Deondre.

Deondre is a rare baby boy name. At the peak of its usage in 1998, 0.011% of baby boys were given the name Deondre. It was #734 in rank then. The baby name has steeply fallen in popularity since then, and is used only on a very modest scale today. In 2018, out of the family of boy names directly linked to Deondre, Andre was the most popular. 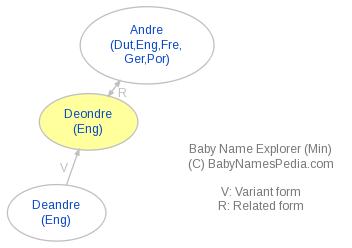