What does Dermot mean?

[ 2 syll. der-mot, de-rm-ot ] The baby boy name Dermot is pronounced as D-ERMahT †. Dermot is of Celtic and Hebrew origin. It is used mainly in the English language. From Celtic roots, its meaning is 'free from envy, free from injuction; freeman'. The name is of debated origin; it could be of the first element dí, and the second element airmait or airmit, or else it could also mean 'free man'. In Irish mythology, it was borne by a warrior who eloped with Gráinne, the intended wife of Finn MacCool. It was also borne by several High Kings of Ireland and by at least eleven Irish saints. The Anglicized form Dermot was first used in 19th-century Ireland. It has since been adopted by the general English speaker, although it is still more common among those with Irish roots. In Ireland and Scotland, Diarmad and Diarmaid can also be Anglicized as Jeremiah.

Dermot is a contraction of Jeremiah (English and Hungarian).

Dermot is unusual as a baby boy name. It is not listed in the top 1000. Among the family of boy names directly linked to Dermot, Jeremiah was the most popular in 2018. 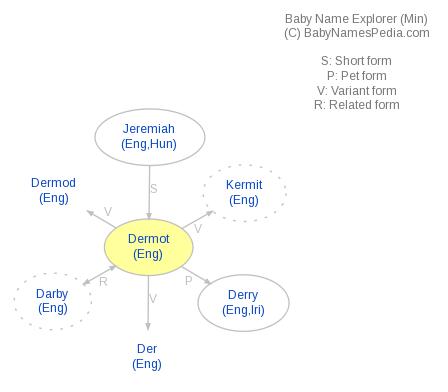