What does Devin mean?

[ 2 syll. de-vin, dev-in ] The baby boy name Devin is sometimes used as a girl name. Its pronunciation is DEHV-ahN †. Devin is used predominantly in the English and Irish languages, and it is derived from Celtic origins. The name is of the meaning poet; fawn; little dark one. It is derived from the elements 'devin' meaning poet ; 'dubh' dark, black. The first name is of obscure origin; it could be from the Celtic element 'devin'. It could also be from the Anglicized Irish surname, itself either from the Gaelic surname Ó Damháin or Ó Dubháin; Damhán is a first name that means 'fawn', while Dubhán means 'little dark one' and can be Anglicized as Duane. The form Davin shows an influence from the name David.

In addition, Devin is a variant spelling of the name Devon (English).

Devin is a fairly popular baby name for boys. The name's popularity jumped from the 1950s up to the 1990s; before that, it was of infrequent use only. At the modest peak of its usage in 1995, 0.308% of baby boys were given the name Devin. Its ranking then was #58. The baby name has since experienced a loss in popularity. In 2018, its usage was 0.052% and its ranking #335, but it was nonetheless the most popular out of all boy names in its group. In 2018, Devin was thrice as popular as the next ranked name, Devon. In the past century Devin has predominantly been a baby boy name. In 2005, Devin as a baby boy name outnumbered its use as a girl name by 16 times. 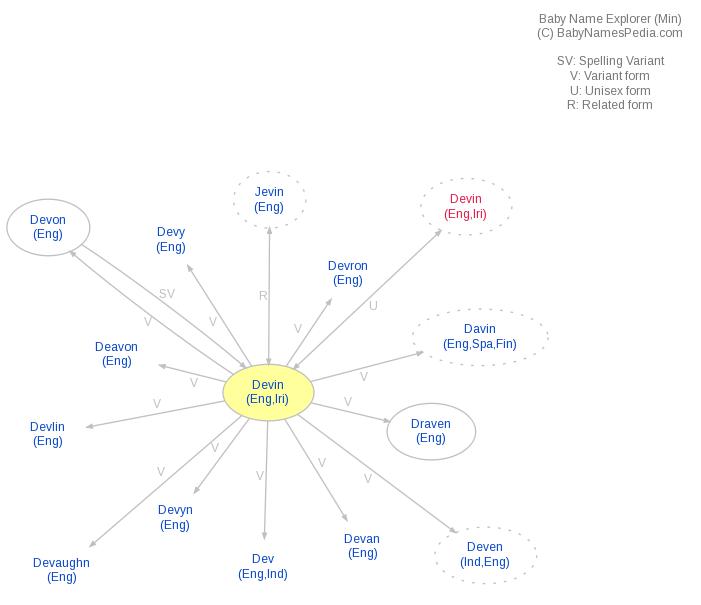