What does Devon mean?

[ 2 syll. de-von, dev-on ] The baby boy name Devon is also used, but less frequently, as a girl name. Its pronunciation is DEHV-ahN †. Devon is used chiefly in the English language, and it is derived from English and Celtic origins. The first name is derived from the name of the county of Devon in England; the county name is itself probably from the name of the Celtic tribe Dumnonii, which existed during the Iron Age and the early Roman period. Since the late 20th century, various forms have been popular among Afro-Americans, with syllables sometimes capitalized, such as DeVon or DeVonn. Forms such as Devonte and Devontae have also been popular with Afro-Americans; these names show an influence from the name Dante.

Devon is a variant of the name Davon (English).

Devon is also a variant of the name Devin (English and Irish) in the English language.

Devon is fairly popular as a baby name for boys. The name's popularity jumped from the 1950s up to the 1990s; before that, it was of very modest use only. At the height of its usage in 1997, 0.160% of baby boys were given the name Devon. Its ranking then was #119. The baby name has since experienced a fall in popularity. In 2018, its usage was 0.019% and its ranking #667. Within the group of boy names directly linked to Devon, Devin was the most regularly used. In 2018, the name was thrice as popular as Devon. There were times from 1978 to 1982 when more girls than baby boys were named Devon, but currently it is more often than not a baby boy name. In 2005, baby boys named Devon outnumbered girls by 8 times. 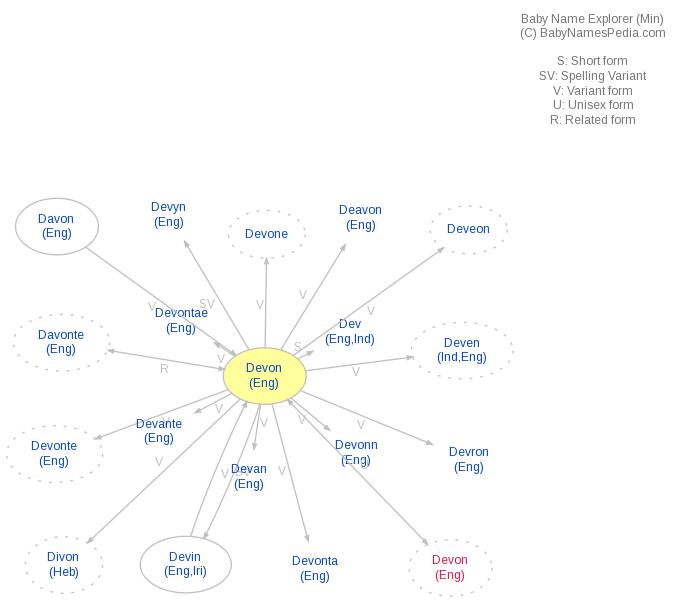