What does Dewey mean?

[ 2 syll. de-wey, dew-ey ] The baby boy name Dewey is pronounced DUW-iy- or DYUW-iy- †. Dewey's language of origin is Hebrew, and it is predominantly used in the Welsh and English languages.

In addition, Dewey is a Welsh form of David.

Forms of Dewey include the names Dewea, Dewee, Dewie, and Duey.

Variant forms inherit both the origin and meaning of the name Dewey.

Dewey is an uncommon baby name for boys. In 1900, 0.212% of baby boys were given the name Dewey. It ranked at #75 then. The baby name has since experienced a steep drop in frequency, and is of only irregular use now. In 2018, within the group of boy names directly linked to Dewey, David was the most frequently used. 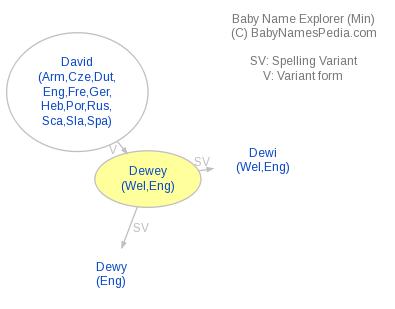