What does Dexter mean?

[ 2 syll. dex-ter, de-xt-er ] The baby boy name Dexter is pronounced as DEHKST-er †. Dexter is largely used in the English language and its origin is Old English. The name is of the meaning dyer, one who dyes. The first name is derived from the surname, which is from a job title. The job title, formed from 'deag' and the feminine suffix '-estre', was originally given to women dyers, but the gender differentiation was later lost in Middle English. The name is sometimes associated with the Latin word 'dexter' (meaning right-handed, skilled, auspicious), which may have contributed towards its adoption. The name Dextra (English) is the female equivalent of Dexter.

Dexter is fairly popular as a baby name for boys. The name's popularity rose from the 1900s up to the 1960s. At the modest height of its usage in 1968, 0.043% of baby boys were given the name Dexter. Its ranking then was #261. The baby name has since fallen in popularity. In 2018, its usage was 0.032% and its ranking #476, but it was nonetheless the most frequently used within all boy names in its group. 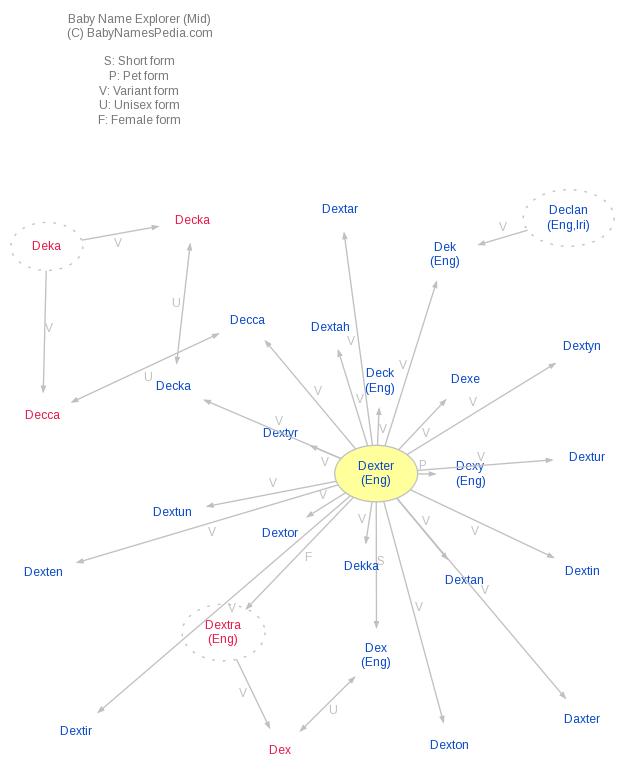