What does Diana mean?

[ 3 syll. dia-na, di-ana ] The baby girl name Diana is pronounced Day-AEN-ah (English) or Diy-AA-Naa (Dutch, German) †. Diana has its origins in the Indoeuropean language, and it is used largely in Armenian, Catalan, Dutch, English, Estonian, German, Italian, Lithuanian, Portuguese, Romanian, Russian, and Spanish. It is derived from the element deiwo with the meaning 'light, deity'. The name is of obscure origin. It was borne in Roman mythology by the chaste and beautiful goddess of the woods, hunting, and the moon, who was the equivalent of the Greek Artemis. Due to its pagan origins and a mention in the Bible that the worshippers of Diana of the Ephesians rioted against the apostle Paul, the name was in early times shunned by Christians. After the Reformation, English speakers nevertheless adopted the name. It might have been popularized in the 19th century by the George Meredith novel Diana of the Crossways (1885). In recent times, the name is famous from the Princess of Wales (1961-1997), but her widespread popularity did not appear to have boosted the adoption of the name.

Diana is a variant of Diane (English, French, and German).

Diana is popular as a baby name for girls. The name's popularity grew from the 1900s up to the 1940s; before that, it was of only occasional use. At the modest peak of its usage in 1946, 0.467% of baby girls were named Diana. It ranked at #42 then. The baby name has since experienced a drop in popularity. In 2018, it ranked at #184 with a usage of 0.087%, but it was nevertheless the most popular out of all girl names in its group. Diana was thrice as popular as the next most popular name, Dayana, in 2018. 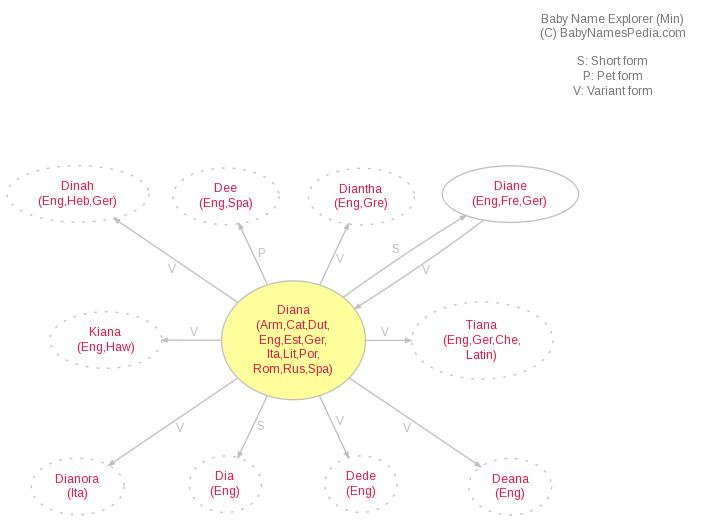